Compared to it's previous upgrade, the Ninja's jumpsuit is now black, with navy blue gloves and shoes, and the shuriken on it's head as well as the ring around it are green.

Counter-Espionage allows the Ninja Monkey to fill a different role besides direct combat, becoming much more a supportive tower, decamoizing all bloons that it successfully damages with its various attacks, as well as sending them back with Distraction and can be upgraded to Shinobi Tactics to increase the fire rate of nearby Ninja Monkeys.

Considering that the next upgrade, Shinobi Tactics, benefits greatly from increased range, adding in Path 1 for increased fire rate, range and doubling pierce is not a bad option to choose. With enough Shinobi Tactics around high-level Ninja Monkeys (especially Grandmaster Ninja or Master Bomber), Shinobi Tactics are able to provide enough Distraction power and Counter-Espionage power to improve defenses against Ceramics and below to a significant extent, even if surrounding Ninjas do not have Path 2 crosspaths.

To make the most of the camo-stripping upgrade, increased attack speed and/or extra pierce or bonus attacks are essential to make the most of it. Often a Ninja with Upper Path 1 upgrades (Double Shot, Bloonjitsu, Grandmaster Ninja) would reliably remove camo off any bloon other than Leads or DDTs, allowing more powerful non-camo-seeing towers to attack stronger bloons that once were stronger camo bloons. Be sure to enable Camo Prioritization, so it'll avoid throwing at non-camo bloons where this upgrade would have no effect.

It is worth noting that the camo-stripping effects are not limited to just shurikens. Flash Bomb with Counter-Espionage (0/2/3 Ninja Monkey) will produce an Area of Effect stun attack that breaks lead, as well as decamoizes all those in the blast, allowing Counter-Espionage to perform at its most optimal. Decamoization by a 0-2-3 Ninja can also be done against DDTs, since Flash Bombs can damage both Lead and Black properties that DDTs possess.

Counter-Espionage has not received any major balance changes since it was first released, although a few bug fixes were made when interacting with other towers. It's worth a small note that the Camo Prioritization target priority given for all Ninjas has made it a bit more reliable as part of Camo Bloon stripping strategies. 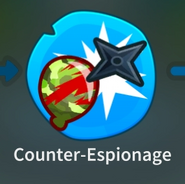 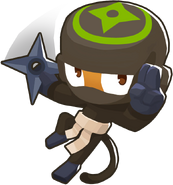 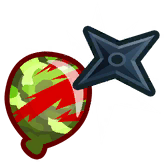