Corrosive Glue returns as the 2nd upgrade of Path 1 for the Glue Gunner in Bloons TD 6. It allows the Glue Gunner to deal damage to bloons over time while glued, but now glue corrodes per 2 seconds, which in total corrodes up to 5 layers (12 with Stickier Glue). Unlike BTD5, having this upgrade or MOAB Glue lets the Glue Gunner target MOAB-class bloons. Blimps affected by Corrosive Glue do take damage over time, but are not slowed down, and glue only has halved duration.

The Glue Gunner gains a purple protective suit and green goggles. When combined with other tier 2 crosspaths, half of the suit will be purple and the other half will be the other path's respective color. When applied as a secondary crosspath for tier 3 and 4 upgrades, their respective suits gain a thin, purple, vertical stripe on the middle of their headgear.

Corrosive Glue will start damaging the glued bloons after 2 seconds and by 1 layer per that same time interval. Due to the previous upgrade, this will persist even if the current layer is popped. The base glue will last long enough to apply 5 layers of damage. Adding Stickier Glue will increase this to 12.

Corrosive Glue can be applied to MOABs, at the cost of halved duration, inability to slow them, and inability to soak through. This means that it deals 2 layers of damage normally, up to 6 with Stickier Glue.

Corrosive Glue is useful as an early-game and mid-game option for handling normal bloons, especially early strong bloons such as Lead Bloons. It deals damage-over-time, which helps break down the affected bloons. In addition, the bloons will be soaked with glue for a considerable amount of time, slowing them down while simultaneously gradually chipping down layers over time. This can help assist other towers to destroy the affected bloons more easily. Corrosive Glue can be added on top of Glue Hose or Glue Strike to maximize the amount of soaked bloons. More importantly, this allows the debuff of Glue Strike and Glue Storm abilities to affect MOAB-class bloons.

However, Glue Gunners with Corrosive Glue fall back severely in late-game and become a nuisance with MOAB Glue, as Corrosive Glue will have the potential to override the blimp slowdown power of MOAB Glue. Corrosive Glue is not an entirely useless upgrade in the late-game, however, as a 2-4-0 Glue Strike and 2-5-0 Glue Storm are the only crosspaths that allow their abilities to attack MOAB-class bloons and thereby apply +1 damage vulnerability to affected blimps, and the infinite pierce of both abilities can be used as a damage counter to Round 101+ hyperclumped Purples.

Corrosive Glue can now target MOAB-class Bloons, but otherwise not much changed for most of BTD6's history. However, in 31.0, the corrosion speed increased somewhat. 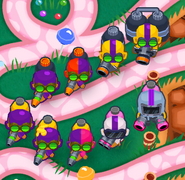 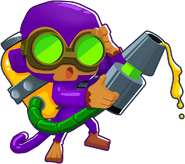