The player receives city cash for owning Contested Territory. The mechanism is similar to Banana Farms. The rate of income is based on the level of the player (the higher it is, the faster they receive cash). After 24 hours (6 in mobile) without re-capturing by a player (either the owner or any opponents), the territory will be reclaimed by Bloons and it is open for anyone to capture again. However, the time between a player capturing the territory and exiting the map is added to their capture time on top of the possible 24 hours. Any cash that is not collected before control is taken by the bloons, another player, or the Contested Territory Fail Glitch is lost. However, if no player takes control over the territory from the time the last player captured it before it is recaptured by the same player (after control by the bloons), the money is saved and accumulated. When the player extends their lead by playing the contest again, the control time will reset to the latest lead time instead of still counting the first of today time.

After the end of the week (midnight in UTC between Sunday and Monday), the player who has owned the territory for the longest time receives

5 in mobile). As of about early 2016, the 1 minute of occupation is required in the Flash version to gain the Bloonstone rewards. If the player is a single-territory occupier (i.e. is the only player in a Contested Territory), the player doesn't earn bloonstones unless he/she possesses it for more than 24 hours. In the Mobile version, there is no time requirement for gaining Bloonstones.

As the player's city levels up, they progress to the higher tiers of the contested territory. On a higher tier, the player must beat a higher level to capture the territory when it is neutral, but they also get a higher reward for controlling it. If a player is at city level X, they will earn 2(X^2+100) income per hour.

Like in BTD5, the player can play as many rounds as they want to. Doing Contested Territory is the only way to reach Rounds 31+ (35+ in the Mobile version). MOAB Class Bloons and Ceramic bloons gain more health as the number of rounds increases. (hence the need to build as many base buildings in addition to having as much research as possible)

Cash per bloon decreases even more, down to about $500 per round. If the player doesn't invest in Banana Farms or other money generation (Supply Drop Snipers, Bloon Traps, Heli Pilots, Regrow Farms), money will become scarce and the player will likely lose between rounds 30 and 40.

In BMC Mobile, getting higher rounds on freeplay may be harder as the game uses more memory, which can result in a game crash from using too much memory. It may also lag severely, taking over 10 minutes per round and slowing the game to a few frames per second and eventually crash.

Contested Territory ends on round 228 on Mobile/Steam, 229 on Grassy Pass, and round 230 on Bloon Dunes. After these rounds, the game exits the CT and counts it as a guaranteed win for the next 24 hours (since no rounds are added once the cap is reached).

The player can earn rewards for beating enough rounds or occupying the territory for a specific amount of time, depending on the type of Contested Territory being played.

In the Flash (online) version of Bloons Monkey City, each Contested Territory lasts for 7 days, regardless of rewarding type. Do note that the amount of City Cash rewarded depends on the tier.

Note: the rewards shown in this table below are correct for those players with at least Level 12. It should be noted that "x" is the minimum number of rounds that the player has to beat to win the Contested Territory (see above tier list).

DDTs are replaced with more ZOMGs. (Strategies may vary, such as that MIB is less required but more effective ZOMG-popping power is more required)

Contested Territory automatically becomes uncaptured for a shorter period (after 24 hours to 8 hours or lower, depending on the tier), if no other players beat the current record.

Contested being introduced after unlocking it at Level 5

The Contested Territory button is at the bottom left.

What you see when you open Contested Territory.

Player with CT by itself

News about the event

Screenshot of Contested Territory in BMC Mobile, with the bests of each player shown 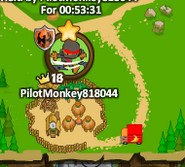 A Banana Truck transporting "cash" to a player's city

Finishing a Contested Territory in second-place

Finishing Contested Territory with no rewards

A player takes over the territory

Player territory stolen by someone else!

Contested Territory is taken by bloons (territory claimage has expired)

Leader of a Contested Territory message

Contested Territory stolen during round

Contested Territory can close in the middle of a game.

Must get 24 hours occupation before getting bloonstones!

Next reward for City Cash, Bonus Monkeys, and Ancient Pack!

Player got rewards from the past Occupation Event

Not shown: the map was Butterfly.

Someone taking territory while I'm trying to claim it!
Add a photo to this gallery