Comanche Defense is the third path fourth-tier upgrade of the Heli Pilot in Bloons TD 6. With this upgrade, the Heli Pilot is able to summon up to three mini-Comanches that move in depending on how far bloons reach in terms of bloon track progress. The mini-Comanches come with fast-shooting three-spray darts and a missile per mini-Comanche with 100 pierce each that deal +2 damage to Ceramics and MOAB-class. The Heli Pilot itself receives a missile with 30 pierce and 3 damage on top of +2 damage to Ceramics and above, a slight improvement of pierce and damage from the MOAB Shove upgrade, while retaining 18 blast radius.

The Comanche Defense is highly unreliable without good backup defense. While the 18.0 update spawn mechanics do make it more controllable as to when the mini helicopters spawn, it still tends to be weak if not all three Comanches are on screen. All of the Comanche Defense's power is in the summoned Comanches, which makes it dead weight whenever they are not present. It is a mediocre stepping stone to the Comanche Commander, and is weak on its own against mid-game, and therefore better options suffice more efficiently overall.

Similar to Comanche Commander, Comanche Defense is a decent synergy with Pat or Gwen, but it is very dependent on those two Heroes to become at least somewhat powerful, not to mention that there is some downtime between mini-Comanche spawns.

Comanche Defense has been buffed significantly since when it was first released. Its reliability has improved substantially with a new summoning algorithm implemented in Version 18.0. It now remains a decent but still somewhat unreliable mid-game option after these changes. In addition, the added base missile attack has added a reliable lead-popping option outside of mini-Comanches, as a little extra while the mini-Comanches are under cooldown.

Artwork in the upgrades menu 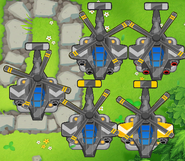 'Our Comanches will blot out the sun', the result of filling the map with Comanche Defense helis 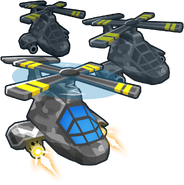