Bloons Wiki
Register
Don't have an account?
Sign In
Advertisement
in: Articles in construction with a WIP, Heli Pilot, Bloons TD 6,
and 6 more

As its name suggests, the Comanche Commander is based on the RAH-66 stealth helicopter, outfitted with desert tan camouflage, green chevron wing emblems, and yellow stripes on its blades. The mini-helicopters are similar, but do not have wing emblems.

Comanche Commander was once one of the strongest towers in the game, by exploiting game-breaking bugs related to Alchemist buffs. While it has fallen in favor after bug fixes, it has recently become recognized as a borderline usable tower due to its synergy with Gwendolin or Pat Fusty. Also, the mini helis are directly benefited by towers capable of inflicting bloon debuffs such as Super Brittle and Glue Strike. But recently, with Geraldo, Comanche Commander can be a budget alternative of Apache Prime, being much cheaper while still dealing comparable or sometimes better damage output.

Compared to an Apache Prime, there are significant differences that define their usage and viability.

In spite of Comanche Commander being close to $20k cheaper to afford, its Tier 4 upgrade (Comanche Defense) is highly underpowered for its price, even when backed up by its regular sets of incoming mini-Comanches. Conversely, Apache Dartship is able to solo up to the early 80s, which excluding Impoppable prices with no farming, allows Apache Prime to be easily afforded if planned properly. However, Apache Dartship can be easily overwhelmed in early 80s rounds due to the high amount of super ceramics, while Comanche Commander can easily be afforded in round 70s or round 80 and Comanche Defense can do comparable amount of damage output compare to Apache Dartship with proper buffing.

Due to the nature of Comanche being inherently weak, it also heavily relies on a hero to buff itself. This is restricted to Pat, Gwendolin, or Geraldo. On the other hand, Apache is much more flexible, being able to choose almost any hero depending on the strategy. 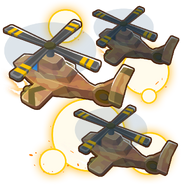