None,
First, Last, Close, and Strong unlocked with Cryo Cannon

For the damage type granted by this upgrade, see Metal Freeze (damage type).

Cold Snap (formerly known as Metal Freeze) is the second upgrade of Path 1 for the Ice Monkey in Bloons TD 6. It grants the Ice Monkey camo detection and allows it to freeze and pop Lead and Camo bloons. This upgrade inherits the effects of Permafrost.

This upgrade replaces the blue snowflake symbol on top of the monkey's head with a dark grey headband with a grey hexagonal piece on the front. The piece is engraved with a light grey snowflake symbol.

Cold Snap produces freezing blasts in a zone-like style. Technically, the Ice Monkey is locked on the Close targeting priority. However, for simplicity reasons, this monkey has no targeting priorities.

As for higher-tier upgrades, this upgrade is generally reserved for Icicle Impale to damage DDTs in the absence any external buffs, mainly Monkey Intelligence Bureau or Acidic Mixture Dip spam.

Most buffs to Metal Freeze/Cold Snap are simply inherited from Permafrost. It was not significantly affected by specialized balance changes until 28.0, where it received built-in camo detection in exchange for a small price nerf.

Metal Freeze on the upgrades menu (before name change)

Cold Snap on the upgrades menu

Cold Snap freezing a Camo Green, popping it into a Camo Blue 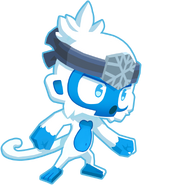 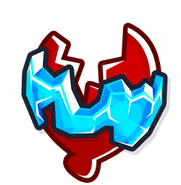