Co-Op Mode is a new mode added to Bloons TD 6 in an update that was released on 2nd July, 2019 for BTD6, on Version 11.0. Unlike Bloons TD 5 Mobile, Co-Op Mode must be unlocked by reaching Level 20. It involves 2-4 players cooperating on a random or private chosen game of BTD6 on a chosen map and difficulty.

Co-Op Mode can be accessed on the main menu. Players can either play on Quick Matches or create/join Private Matches. Each player will be assigned a specific number (P1, P2, P3, or P4) depending on their timing to a Co-Op Match. Players can leave and re-join at any time during the Co-Op match, but there are still risks to leaving a match.

Players are limited by their respective sides, usually a specific quadrant(s), unless the tower territory distribution is modified by a specific map. Some maps may have universal territories, as indicated by a colored "A" symbol, to represent an "All Players" territories. Players may only transport their own towers via Support Chinook only to within their allocated territory(s). Collectable items, such as bananas from Banana Farms, are only able to be picked up by the owner of the tower(s) that outputted the collectable items. In addition, other players cannot modify other players' towers or sacrifice them, with the only exception being Sun Temple, True Sun God/Vengeful True Sun God and Paragon sacrifices. However, abilities that lack the possibility of accidental sabotage such as Jungle's Bounty (counts everyone's Banana Farms in range) can become influenced or can influence other players' towers.

Every player starts with the same amount of cash minus $100 (-$50 in Half Cash) for 2-Player, and minus $50 per additional player (-$25 per additional player in Half Cash). If the "More Cash" MK is unlocked by any player, it will be distributed evenly among each player. While playing the game, the full cash is gained for a particular player's cash account while popping bloons or generating cash. Players can share or request cash during the game on at anytime via the Co-Op Communication Menu on the right-hand side of the screen.

Before playing each game, players will be able to choose their own Hero; this is to be done before starting up Co-Op Mode, as there is currently no way to change Heroes while waiting for players to connect to a Co-Op Mode game. In addition, players are allowed their own set of Tier 5 towers (i.e. up to 4 of a single Tier 5 on each side, up to 8 for Crossbow Master with "Master Double Cross" MK enabled), which allows each player to decide on their own sets of Tier 5 towers without another disrupting other players' Tier-5 tower selection progress.

Additionally, Co-Op Daily Challenges may appear around 2 times per week; one on Sunday and another on Wednesday.

Players are able to request and exchange cash from one player to another and send emotes with in-built functions. To access Co-Op related communicational commands, tap the Co-Op button on the right of the screen to open.

Players can mute other player's cash requests or emotes by pressing that player's mute button on the menu.

If the player(s) lose all their lives, any of the available players must press the Continue button in order to continue (unless CHIMPS Mode, Deflation Mode, or any other mode that limits use of Continues). Players may restart, but only players who presses restart will be redirected to a restarted match.

Here is a list of the available emotes that can be sent to other players.

These emotes are provided to the player at the start.

For a list of possible interpretations of each default emote, see Co-Op Mode (BTD6)/Strategies #Emote Interpretation.

These emotes have to be bought at the Trophy Store before they can be used.

There are some interesting interactions that are worth noting that may cause changes in tower behavior and player strategy, including:

Unlike BTD5, all maps are available for Co-Op. However, each map has different territory distribution boundaries depending on the nature of the map. Some maps, such as Firing Range and all Expert Maps, do not have any boundaries; these maps are marked on the map display with a colored "A" symbol to indicate that all pieces of land are universal. The game uses the same configuration for 3-player games as it does with 4-player games, but one of the quadrants will be available to all players. The following key will be used to identify maps' configurations:

Quick Matches are publicly available, and there are three types of Quick Matches, all of which could have 2-4 players per match. Expert Maps, Alternate Bloons Rounds on Beginner Maps, Deflation Mode, Apopalypse Mode, Half Cash, and C.H.I.M.P.S. difficulties cannot be encountered on Quick Matches. The following match modes are listed:

When successfully completed a game mode, there will be a two-page completion screen: the first page will include a list of useful statistics relating to each of the contributing players, alongside an image depicting the game's interpretation of the highlight statistic for each player:

Differences between BTD5 and BTD6[]

Connection Menu, preparing each player to connect in Co-Op

Lose menu in Co-Op. Note the hollowed out Restart Button, due to servers requiring time to save the connections data

Game Over in Co-Op, after reaching Freeplay and losing 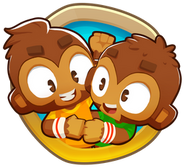 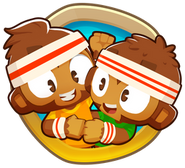 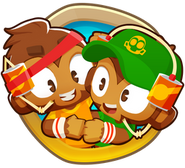 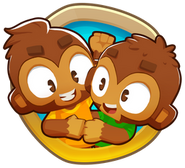 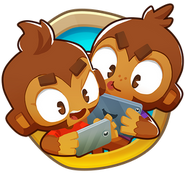 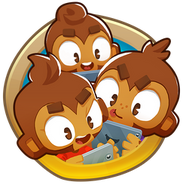 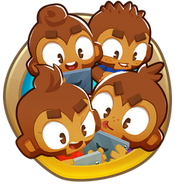 Players with Fumigator and Fired Up

Thumbs Up Emote by Player 1

"Thanks!" Phrase by Player 1

Crying Emote by Player 1 (without tears, due to animation)

Thumbs Down Emote by Player 1

A 2-3-0 wizard monkey with the upgrade paths showing as 2-2-0. Note the artwork and tower in-game are properly showing up as 2-3-0

Another player's glue gunner with price bug on glue hose

The player's Druid, with heart of oak price bugged 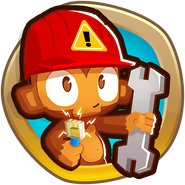