This upgrade recolors the cannon from black to a light green base and a thinner yellow barrel. The reinforce gains two bands around it.

With path 1 crosspathing, the base gains 1 or 2 dark red stripes.

With path 2 crosspathing, the base gains fins and turns light grey.

Cluster Bombs causes every bomb to produce 8 smaller additional explosions, each dealing 1 damage with 10 pierce in an Orbital Spray.

The cluster explosions gain as much pierce and damage from path 1 crosspathing as the main explosion.

Cluster Bombs is an effective early-game option for destroying dense groups of bloons. Cluster Bombs usually performs better than Really Big Bombs in most situations, because the combination of all its secondary explosions cover a wider blast radius while occasionally overlapping damage to the same bloon(s), dealing a lot of damage versus weaker and stronger bloons. In addition, Cluster Bombs surprisingly deals good damage versus MOAB-class bloons for its price, although still weaker than MOAB Mauler in that regard.

The main purpose of Cluster Bombs is to be used for extensive explosion coverage, which allows it to deal good damage against various types of grouped regular bloons. Cluster Bombs becomes exceptionally more powerful with the Path 1 crosspaths, specifically with Heavy Bombs, as its secondary explosions are also affected by the extra damage benefits. Especially when paired with Striker Jones, a single 2-0-3 Cluster Bombs can easily deal great damage versus early mid-game grouped bloons for its price, and still counters them nicely even without him due to Version 28.0 providing it with innate black-popping.

Prior to Version 28.0, which gave Cluster Bomb explosions black-popping power, Cluster Bombs remained fairly similar compared to when it was first released, although with a bit of improvements to bomb crosspathing as well as small pierce adjustments for Bomb Shooters in general. During the release of Version 28.0, the BTD6 community also discovered the Striker + Cluster spam as a viable alternative to Mauler spam; the main difference being Clusters nearby a Primary Expertise and using MOAB Eliminator for destroying BADs. 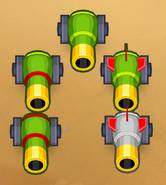 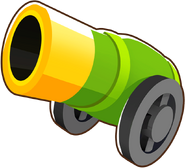 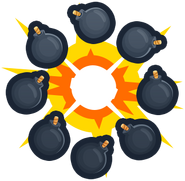