Cleansing Foam is the 3rd upgrade of Path 2 for the Engineer Monkey in Bloons TD 6. It grants the Engineer Monkey with an independently shooting cleansing foam gun that regularly sprays cleansing foam around the Engineer's range every 2.0s (every 1.2s with 2-3-0). The foam blobs can remove the camo and regen properties from bloons that touch it, including from DDTs. They also damage Lead Bloons by cleansing them, converting normal Leads and Fortified Leads into Black Bloons, but zero damage to DDTs. Each foam blob can soak up to 10 bloons (15 with 0-3-1 or 0-3-2) or 8.5s before disappearing, whichever comes first.

Starting from Version 29.0, Cleansing Foam's foam will default on Close and can be retargeted to any valid location within the Engineer's immediate range, including on non-track locations.

Crosspaths greatly affect Cleansing Foam's supporting role. Sentries with Cleansing Foam cause each hit to strip Camo and Regrow as well as cleanse Leads in a similar way to normal foam. With Pin, affected non-blimp bloons passing the foam are briefly slowed down by 50% for 2 seconds.

Cleansing Foam adds a large blue tank of foam with a white band and grey tubing linking it to the nail gun, which now has blue highlights and spurts foam as well. The Engineer's helmet is painted white, and their jacket is also swapped out for a white lab coat.

Crosspathing with path 1 paints the nail gun green and gives Engineer a combination wrench, before painting its handle red.

Cleansing Foam adds a new foam attack to the Engineer, deploying foam capable of cleansing Bloons which pass over it, stripping them of camo and regrowth properties, and converting leads to Black Bloons. This foam is deployed every 2 seconds (every 1.2s with Faster Engineering) and has 10 pierce, (15 with Oversize Nails) and a lifespan of 8.5 seconds.

Foam pierce can be consumed by Bloons without any special properties.

The foam naturally targets Close, but can be selectively targeted anywhere within the Engineer's range.

Sentries obtained from 1-3-0 remove properties with their projectiles, on top of the increased MOAB and Fortified damage from Deconstruction. 2-3-0 increases rate of deploying sentries and creating foam.

Foam gains +5 pierce from Oversize Nails, for a total of 15, and is able to slow non-blimp bloons by 50% for 2 seconds when given Pin.

Cleansing Foam fulfills a similar role to its BTD5 counterpart, removing Camo and Regrow properties off bloons hit by the foam globs. The difference, however, is that Cleansing Foam now comes with large range already and targets consistently on a given location. It is not necessary to the Engineer away from the track, as the Foam can be smartly targeted to any desired location within range. Path 1 crosspath not only provides the Engineer with needed extra sources of popping power, it also enhances the production speed of foam globs by a significant amount with Faster Engineering, at a +66% increase, compared to Path 3 with just gives pierce.

Version 31.0 has reworked Cleansing Foam to achieve much stronger crosspathing value. In particular, 0-3-2 can be used to slow down all regular bloons, making the pierce consumption of foam not become a liability but rather beneficial. It is a very cheap slowdown option, and can compete against regular glue. 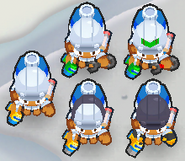 Special foam placement, defaulting on Close, as of Version 29.0

Positioned foam on a non-track spot 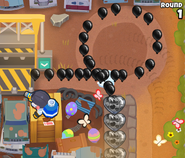 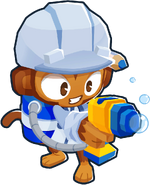 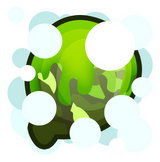