Cleansing Foam is the third upgrade on the first path for the Monkey Engineer in BTD5. It allows the Monkey Engineer to shoot a blob of foam that can remove Regen and Camo properties of bloons, as well as pop Lead Bloons. Up to 3 blobs of foam are able to be applied onto the track at once, unless the Monkey Engineer has an attack speed boost which will add more blobs on the same map. If a certain amount of bloons go over the foam, it disappears, regardless of if they are Camo, Regen, or Lead. 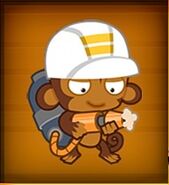 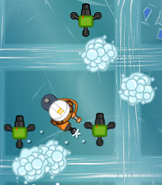 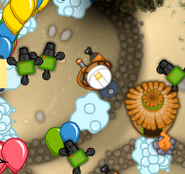 Bloons going through the Cleansing Foam in BMC Flash

Cleansing Foam icon in BTD5
Add a photo to this gallery

Retrieved from "https://bloons.fandom.com/wiki/Cleansing_Foam_(BTD5)?oldid=270879"
Community content is available under CC-BY-SA unless otherwise noted.