Start a Wiki
Clans are a feature that was added in 2016 and can be accessed on these versions Bloons TD Battles Mobile and Steam, allowing a group of up to 50 players to join forces to benefit each other. People in the clan work together by winning games to earn keys. At the end of each week, the total number of keys gained by every clan member is counted, and the clan earns one of ten different War Chests accordingly. Each War Chest comes with a different design, reward, and number of keys required to unlock. Rewards range from just a handful of medallions to new symbol pieces (for clan logos) and profile skins. Creating a clan costs

100,000 (or $4.99 USD), and a player paying this becomes a clan leader. Clan leaders can name their clan, write a clan motto, and decide to let others join freely, or by request. They are also allowed to kick players from their clan. Keys are granted equivalent to 2% of medallions won rounded up. Every clan has a logo, created by the clan leader. A clan logo is made up of a coloured outline, with a Bloons-related picture within it. If a player is part of a clan, their clan logo will show up in place of their profile picture when they join a game.

More TBA to be continuing. 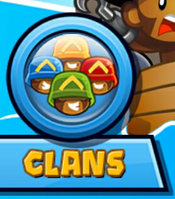