Despite being considerably easier to pop than M.O.A.B. Class Bloons, Ceramic Bloons are a serious threat in numbers that shouldn't be ignored. If the player has a large amount of potent towers, then Ceramic Bloons and their descendants aren't really a threat. However, popping many Ceramic Bloons without strong towers or many weaker towers is difficult. They can be a minor cause of lag to your computer or device. Glue can't slow them down (BTD4 and BTD5 Flash only), however Corrosive Glue can harm them and can crack the layers.

There are many rounds in which Ceramic Bloons come in big groups (like 63, 76, and 78), which can be extremely deadly and dangerous without strong towers. If they come early, it can usually mean game over unless you manage to get strong towers. In BTD3, it's an instant game over on Medium and Hard - if it escapes.

Takes more than 1 hit to break

Immune to slowing by glue (BTD4 only, plus BTD5 Flash only)

Super Ceramics are a special type of Ceramic that appear starting in Bloons TD 5. They have increased health but spawn only one Rainbow Bloon. Their purpose is to reduce lag in freeplay mode while still granting as much cash as normal ceramics do.

They appear in Rounds 86+ in BTD5 and BTD5 Mobile, Rounds 30+ in BMC Flash and Mobile (this also applies to Boss Fights for the Flash version past boss level 30, although bugged to give less cash than normal), Rounds 35+ in BTDB Flash, Rounds 43+ in BTDB Mobile, and Rounds 81+ in BTD6.

Due to their high health but the lack of multiple children, towers with relatively low pierce but high stalling power or high damage are recommended. Although not so commonly encountered in BTD4 or BTD5, it is important to greatly consider countering these bloon types. Stalls such as Ice Towers/Ice Monkeys, Summon Whirlwind/Druid of the Storm, and Bloonjitsu + Distraction are among some of the useful towers for stalling Super Ceramics.

In BTD6, Super Ceramics must be encountered when attempting to complete Impoppable Difficulty or C.H.I.M.P.S., and because of this, special strategies must be handled in preparation for these greatly reinforced bloons. It's worth noting that Super Ceramics spawn fewer bloons when the ceramic layer is broken. This feature gives an easier time for multiple 0-1-2 Ice Monkeys to handle Super Ceramics, although it will take a considerably long time before the extra hard shells crack into weakened versions of Rainbow Bloons. Super Ceramics are also easier to blow back from x/3/x Downdraft Heli Pilots. Glue Gunners, especially to the likes of the 5/x/x Bloon Solver or the normally less powerful 0/3/2 Glue Hose, will find it easier to handle them.

Glue can slow down Ceramic Bloons. 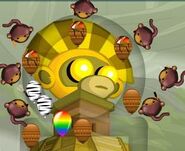 BTD6 warning
Add a photo to this gallery