Bloons Wiki
Register
Don't have an account?
Sign In
Advertisement
in: Articles in construction with a WIP, Banana Farm, Bloons TD 6,
and 5 more

Central Market is the fourth upgrade of Path 3 for the Banana Farm in BTD6. It greatly increases the amount of money per round by increasing the value of each banana to $70 instead of $20, providing up to $1120 per round (+$140 per Path 1 crosspath). In addition, it increases the income of Merchantmen by 10%, which can stack up to 10 times. Central Market's income bonus does not stack on top of Trade Empire's income bonus but can co-exist.

The Central Market is a stone building with a large red roof and awning above a set of four stone pillars, each with blue sheets draped between them. On its right is a stack of a few cyan crates, one with a banana logo, and between the pillars and to its left are several wooden crates.

On top of the roof are four multi-colored flags, and from the player's perspective, top-down, left-right, they are light green, blue, pink, and yellow respectively. Behind the blue flag are several palm leaves.

Akin to its prior upgrade, the Marketplace, Central Market makes it easy for a player to accumulate money to spend within the round with no input outside the purchase of the base Banana Farm and subsequent upgrades. The primary extra benefit for this upgrade comes from the increased value of each banana.

Consequently, the second perk for the Central Market is its ability to increase Merchantmen (and subsequent fourth and fifth tier upgrades) by a 10% margin. This has the ability to increase the gains of Merchantmen the equivalent of the Trade Agreements without having the Monkey Knowledge allocated to that piece of knowledge, as well as increasing the high profits of Favored Trades and Trade Empire by a considerable amount. This effect also stacks with other Central Markets up to 10 times, allowing for the money-generating properties of the bottom path Buccaneer to become even more potent.

Comparative to earlier versions of the game, a basic Central Market without crosspathing is overall worse than it used to be, as it produces less overall money. This only further stresses the benefits from crosspathing. Even though the numbers show there to be no difference between a 2-0-4 and 0-2-4 without Monkey Knowledge, it is better to choose the top path upgrades in this scenario as the additional cash will multiply in the long run.

Central Markets producing cash at identical rates within a round 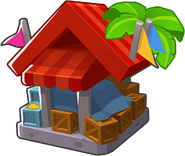 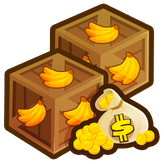