Bloons Wiki
Register
Don't have an account?
Sign In
Advertisement
in: Articles in construction with a WIP, Monkey Ace, Bloons TD 6,
and 5 more

Centered Path is the second upgrade of Path 3 for the Monkey Ace in Bloons TD 6. It adds a new targeting option "Centered Path" that sends the Monkey Ace along a circular path around a point (located at the center of the map by default). It does not matter where the Monkey Ace landing pad is for a Monkey Ace set to Centered Path; by default, they will all loop around the same path, albeit different parts of the loop depending on timing at which the player changes the loop setting.

Starting from Version 27.0, the center of the Centered Path loop can be manually changed per Monkey Ace. This allows it to be locked into a loop anywhere on screen at the player's own will.

The aircraft gains a full red coating throughout, only leaving out the blue rings on each side of the upper biplane wing.

Like most Monkey Aces, Centered Path shoots darts in a zone-like fashion while having Path-Based Mobility.

Centered Path adds an extra flight path that encourages free movement of Monkey Aces, letting them become less limited by placement of the Monkey Ace landing pads. Adequate timing of the Aces to align on the path smoothly might be necessary to optimize this upgrade, but purchasing this upgrade is very helpful on certain maps with good overall central circular track coverage.

The option to choose the center of the loop now makes it possible to make a creative method of Ace micro based on Centered Path repositioning.

Gained a functional change in Version 27.0 to improve fixed mobility and likely to give more reason for this upgrade over just Sharper Darts. In fact, this has lead to higher-skilled Ace micro players to utilize Centered Path as a new form of Ace micromanagement. 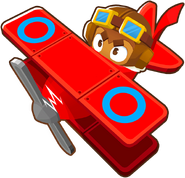 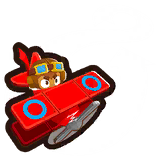