Breaking the ice from Frozen Over

Cave Monkey is a tower that was first introduced on Version 17.0. It is unlocked for a single game upon breaking apart the frozen Cave Monkey on Frozen Over by repeatedly bombarding it with a Mortar Monkey for a total of 30 or more times. Upon breaking the ice, the Cave Monkey spawns close to the entrance of the track. Towers can still be placed on the ice after it breaks.

No upgrades are available for the Cave Monkey, and selling it will give no money. There is no way to get the Cave Monkey back if sold outside of starting a new game. 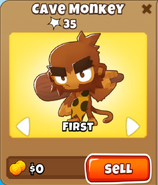 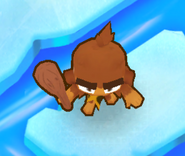 Spawned Cave Monkey in a challenge with only Bombs and Mortars 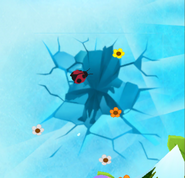 Cave Monkey rising up
Add a photo to this gallery

Retrieved from "https://bloons.fandom.com/wiki/Cave_Monkey?oldid=262826"
Community content is available under CC-BY-SA unless otherwise noted.