Carrier Flagship is the final upgrade of Path 1 for the Monkey Buccaneer in Bloons TD 6. It upgrades its mini planes to deal much more damage, pop any bloon type (excluding Camos, unless given camo detection), and each shoot one rapid stream of smarter darts. In addition, all water-based towers (Monkey Buccaneers, Monkey Subs, Admiral Brickell, water-placed Pat Fusty, or water-placed Sun Temple and its upgrades) and Monkey Aces attack ~18% faster. Two new small platforms are located on the upper decks of the Carrier Flagship, extending the tallness of other towers to partially ignore Line of Sight limits for monkeys placed on them. The right platform increases tallness more than the left.

Mini planes deal much greater damage overall compared to its previous upgrade. Darts pop any bloon type (except Camo, although 5-0-2 crosspath allows popping of Camos), and its homing anti-MOAB missiles become even stronger (every 1.5s, 4 pierce, 30 damage). The front-firing darts of each plane will now fire only one rapid stream of darts, although these darts have increased pierce (+5 per dart, 14 pierce per dart overall), extra damage (+1 per dart, +3 on top against Ceramics), and will aim at bloons rather than firing forward.

The Carrier Flagship becomes a darker blue-grey compared to Aircraft Carrier. The Monkey disappears, as well as the blue flag at the top of the island. The visual size of the ship is much longer, and gains a second island on top of the hanger covering the runway. Both islands have an "m" in a circle at the top, similar to a helipad, and can support up to a medium-sized tower each.

Carrier Flagship can fit up to two land towers of medium-sized footprint or smaller on its platforms.

Combining decent overall damage and its unique utilities, Carrier Flagship is an effective Tier 5 upgrade overall compared to its price. Although its planes do not get affected by the Alchemist buffs, its main sources of benefit are more from two specialties: the global attack speed bonuses to water-based towers and Monkey Aces, and its two platforms where land towers can be placed. It can be used with Arctic Wind to "terraform" water for providing expansion of land space to purchase Monkey Villages or other nearby support towers.

Carrier Flagship, while rarely appearing as a meta CHIMPS tower on most maps, makes a notable appearance on Flooded Valley, particularly when paired with Pat Fusty and The Tack Zone. In particular, The Tack Zone being placed in the middle of the track via the Flagship's platforms optimizes its MOAB-class popping power. However, care should be taken to visualize where the platforms would go prior to upgrading, as otherwise there will be problems with accidental occupation by other towers via strange bugs; there is a bug where Fusty blocks placement for Tack Zone despite him not being actually placed on top of the platforms.

Buffed overall for the main attacks.

Carrier Flagship and its planes

Two Heart of Oak Druids on a Carrier Flagship 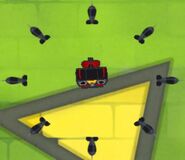 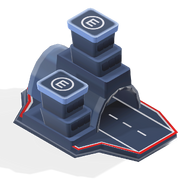 Sentries on the Carrier Flagship

Pat Fusty on the Carrier Flagship

Cave Monkey on the Carrier Flagship

Captain Churchill not able to be placed on Carrier Flagship

Spike Factory not able to be placed on Carrier Flagship...

...including the upper platform 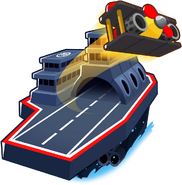 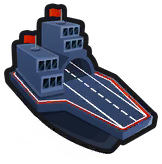