Carpet of Spikes is the final upgrade of Path 2 for the Spike Factory in Bloons TD 6. It allows the Spike Factory to automatically shoot out Spike Storms every 15 seconds. The automatic "Carpet of Spikes" spike piles will last for just over 20 seconds at minimum instead of 10 seconds, and will continually maintain its ever so deadly spike carpet. In addition, its main attack gets a massive stat increase.

Carpet of Spikes expands the four vents on each corner of Spike Storm into four additional spike ports; these are purple with black metal surrounding them, and they each share the same swirling pattern of the main port. The main body itself also loses the metal bands near the port.

Carpet of Spikes increases the base spike damage by 3, for 4 total, and thus the MOAB damage to 8; its base attack speed also just about triples (0.33 second attack cooldown as opposed to 0.98 seconds) and it gains +16 base attack range, for 50 total. It also now possesses a passive variant of its Spike Storm ability: this version occurs every 15 seconds, and its spikes, along with those of its activated ability, last 20 seconds, instead of the previous 10; they also still last between rounds. Ability spikes only gain 2 bonus damage instead of 3 bonus damage, due to a possible oversight.

Note that the passive ability's cooldown is still considered ability cooldown; thus it can be buffed by Energizer, but not speed buffs like Jungle Drums

As with Spike Storm, Smart Spikes increases ability spike lifespan by 50%, for 30 seconds total, causes the ability to only target active lanes, and allows the ability to receive 4x attack speed if it triggers within 2.5 seconds of the start of a round.

Carpet of Spikes defaults on Normal targeting priority, which dispenses the spikes onto nearby bloon track in a semi-sporadical behavior. If given Smart Spikes, it will also receive Close, Far, and Smart.

Spike Storm's active and passive abilities are targeted across the whole screen and on the track. With 0-5-2, the tracks targeted are reduced to only the active lanes.

Carpet of Spikes is specifically designed for widespread area damage, and its main strength comes from regularly spreading high-damage spikes across the map to severely weaken MOAB-class bloons, especially strong singular bloons. Its main weakness comes from wasting damage on much weaker bloons, but pairing up a Carpet of Spikes with towers specifically designed to counter weaker bloons, especially versus Super Ceramics. Provided it is supported by effective Super Ceramic counters, Carpet of Spikes is pretty decent overall as an option for high damage to high-HP blimps as well as general blimp damage. Although not the most efficient option compared to alternate options, it is still rather reliable overall.

When activating Spike Storm ability or activating its passive ability:

Carpet of Spikes with produced spike piles on the left side

New description of the Carpet of Spikes as of Version 4.0

Carpet of Spikes dealing massive damage to Round 63, with 3 damage per spike 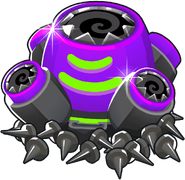 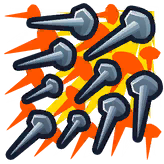