Card Battles are battles with 15 chosen cards containing towers and bloons. They were introduced into Bloons TD Battles Mobile on June 20, 2016 and 9 days later, Veteran Cards were introduced, each card uncovering on a weekly basis.

See individual towers/upgrades on their own page(s) to see the towers.

They have a blank icon on the top left corner.

Veteran Cards are made available to the game weekly. To unlock them a certain amount of battles is required before getting the Veteran Card(s) desired.

They have an 'I' (symbolizing 1) on the top left corner.

Power Cards are usually one-use cards that either boost your defense and/or sabotage your opponent's.

They have a 'II' (symbolizing 2) icon on the top left corner.

There are two other unused Power Cards found in the game's data. It in unknown why they're unreleased.

After trashing a card, the next card will not be the same card already trashed.

Using a Heli Pilot Card with the Pursuit upgrade automatically sets it to Pursuit Mode. (Technically a buff, but some players suggest it hinders the Heli Pilot)

Option to purchase multiple decks of 15 cards per deck. Costs $4.99 USD to purchase.

In desktop version, hovering over a card now highlights the card by expanding the size of it a little.

White bloon cards are given their proper look (i.e. they are no longer light blue).

It is now easier for smartphone players to place towers at the bottom of the map.

Power Card descriptions are now available to access in the "Edit Deck" menu.

Cards will only reappear in the deck after being played or trashed once the entire deck has been drawn.

You can now use Track Powers such as Red Hot Spikes in Card Battles.

Instructions on how to play Card Battles.

Zooming in into a card.

Placing a Bloon Send from a card.

Placing a tower from a card. 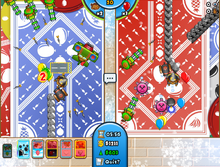 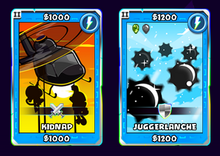 Please update as time passes by and only add cards that are confirmed!