Captain Churchill is a Hero in Bloons Tower Defense 6 who was added to the game in the 2.0 Update. He pilots a tank, as such he utilizes explosives as his main form of attack. The tank launches explosive shells that generate multiple explosions, and leveling him up adds more weaponry to the tank. Churchill is currently the most expensive hero in the game so far, costing $1,700 on Easy, $2,000 on Medium, $2,160 on Hard, and $2,400 on Impoppable. In addition, he is only unlockable by a one-off purchase of

Captain Churchill will start upgrading himself every round upon placement. He earns more XP each round to unlock his next upgrade irrespective of how many bloons he pops. His upgrades can also be immediately bought with cash, though the amount of cash required to purchase the next upgrade will typically increase as the upgrades get higher, making self-upgrading an important element for his overall power.

Captain Churchill requires 1.71x (2x before Version 8.0) as much experience to upgrade towards each level compared to Quincy, Gwendolin, Striker Jones, or Obyn Greenfoot.

In the 8.0 update, Captain Churchill has recieved a skin themed on Super Sentai and/or Power Rangers, called Sentai Churchill. It turns Churchill and his tank into a galactic Sentai warrior. His tank also spins and acts differently when Churchill levels up. It costs

2500 to purchase this skin, and it can only be unlocked upon purchasing Churchill.

When popping a MOAB-Class bloon:

When popping a MOAB-Class bloon: 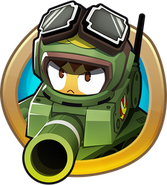 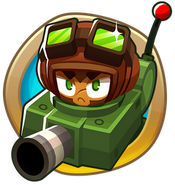 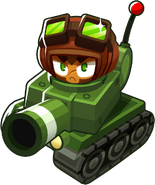 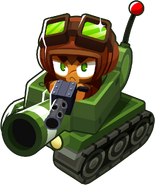 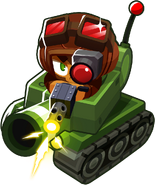 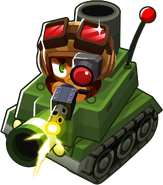 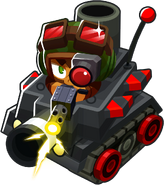 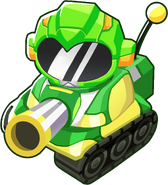 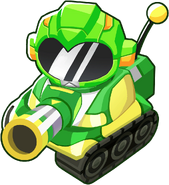 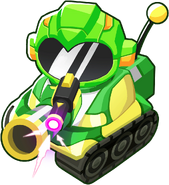 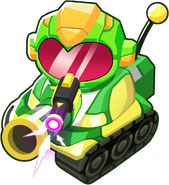 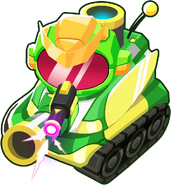 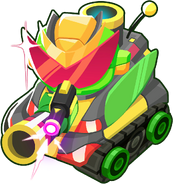 One potential strategy of Captain Churchill being used in a late-game situation, which deals well as an emergency MOAB-class popper. 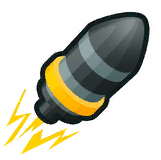 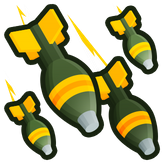 Retrieved from "https://bloons.fandom.com/wiki/Captain_Churchill?oldid=267139"
Community content is available under CC-BY-SA unless otherwise noted.