Cannon Ship (BTD5) is an upgrade for the Monkey Buccaneer in Bloons Tower Defense 5.

This upgrade adds a powerful, independently firing cannon to the Monkey Buccaneer.

The cannon allows the Monkey Buccaneer to pop frozen and lead bloons. Note that the cannon fires bombs separately from the main dart. The explosion size is the equivalent to a Bomb Tower with Bigger Bombs. 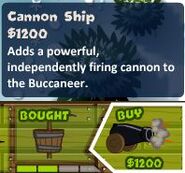 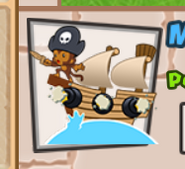 BMC Mobile upgrade icon
Add a photo to this gallery

Retrieved from "https://bloons.fandom.com/wiki/Cannon_Ship_(BTD5)?oldid=269479"
Community content is available under CC-BY-SA unless otherwise noted.