Bloons Wiki
Register
Don't have an account?
Sign In
Advertisement
in: Articles in construction, Articles with incomplete sections, Pages with broken file links,
and 13 more

The Camo Bloon is a stealthy bloon that made its debut in Bloons TD 4. Introduced as a single bloon type, it later become a property applicable to any bloon in subsequent games. If a monkey lacks "camo detection", camo bloons are considered invisible and cannot be targeted or popped by that monkey.

In BTD4, they are a type of Bloon which contain 2 Pink Bloons, making them about the same level of parenthood as the White Bloon and Black Bloon. Its RBE is 11 (the game says it's 9, but it actually takes 11 hits to pop), and they move at around the same speed as the Blue Bloon. The first Camo Bloons appear on Round 24. Unlike later games, any projectile can hit a Camo Bloon regardless of having camo detection or not.

In Bloons Pop!, Camo Bloons return. However, this time around, the camo property is not permanently active. Camo Bloons flicker in and out of transparency every few seconds. When transparent, Monkeys without Camo Detection will have their attacks phase through the Camos. But when they are not transparent, they can be hit by monkeys without camo detection.

All Camo Bloons that spawn on each round, not including other non-camo bloons that appear on the listed rounds. Up to Round 100 is shown for purposes of displaying information for completing CHIMPS.

All Camo Bloons that spawn on each round, not including other non-camo bloons that appear on the listed rounds. Up to Round 100 is shown for purposes of displaying information for completing "R100 Insta" runs.

Mirrors the even rounds in a standard game of Bloons TD 6.

Camo Bloons can only be detected by some monkeys, usually requiring some upgrades or a nearby tower that gives them that ability. While it is simple to counter in BTD4, it becomes even more important starting from BTD5, as it is no longer possible to "accidentally" hit Camo Bloons starting from that game.

Countering Camo Bloons can be done in three distinctive ways: placing down a camo-detecting tower or upgrading an existing tower to a camo detection upgrade, giving a tower camo detection via Radar Scanner or similar, or by the use of decamo (stripping a bloon of its Camo properties).

In Bloons Pop!, Camo Bloons can technically be popped by any monkey, but the majority are unable to pop them if Camo Bloons phase into invisibility. Only few types of monkey can detect camo fully, such as the Ninja Monkey. The only way to universally detect camo fully is to use the Radar powerup, which only removes camo off bloons currently possessing the camo property. 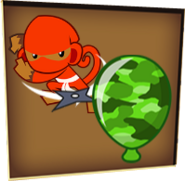