Caltrops is the second upgrade of Path 3 for the Ninja Monkey in BTD6. It allows the Ninja Monkey to create an additional attack that dispenses caltrops onto the ground every 4.4 seconds, similar to a Spike Factory. Each caltrop can pop up to 6 Bloons before it becomes used up. Caltrops have a lifespan of 70 (?) seconds or 1 round, whichever comes first. 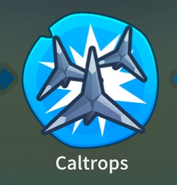 Retrieved from "https://bloons.fandom.com/wiki/Caltrops?oldid=238053"
Community content is available under CC-BY-SA unless otherwise noted.