Depends on what tower slot it's in.

COBRA (Covert Ops Battles Response Agent) is a tower appearing in Bloons TD Battles Mobile and Steam as well as Bloons Adventure Time TD. It was added in the update on August 18, 2014. The tower costs

5000, tallying the third most medallions to get an item in BTD Battles, only overcome by the Silver and Golden weapon skins. However, it can be bought for USD $4.99 or equivalent (still more than all the other towers, for USD $3.99). Winning battles in Battle Arena is essential to be able to afford the tower, given the classic mode's rewards are only a fraction of the cost of the tower.

Its upgrades are generally focused on changing game mechanics in ways that were previously impossible. However, it must be used in combination with good grouped popping power and camo popping power as it possesses neither. Also, it is sometimes banned in Bananza Battle Arena.

The COBRA returns as an Epic Ally in Bloons Adventure Time TD and can only be equipped by monkey characters. You can only place one COBRA per each monkey who equips him, but being a total of 8 monkey characters so far, you can get up to 8 COBRAs in a single game (even more if you get Warrior Bubblegum to the right upgrades and Commander Cassie's Scramble upgrade). He costs $400 to place. Like in Battles, COBRA's base attack pops 1 bloon at a time and pops 2 layers each attack, but every few seconds he can also drop suitcases full of cash and med crates. Cash drops range between $50 and $100 cash, and med crates can drop between 1 and 2 lives. However, when calling for supply crates, COBRA will also stop shooting for a couple of seconds. Being an Ally, COBRA only has 3 upgrades, but they can be powerful, especially for providing extra damage against MOAB Class bloons. 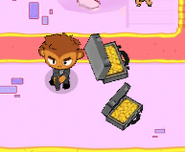 Gaining cash drops and med crates from COBRA, in BATTD

The COBRA is capable of highly influencing the outcome of a game. Ever since the COBRA was added to the game, it has almost always been nerfed in updates. Most of these nerfs are to some of its most powerful upgrades.

The only popular loadouts that uses the COBRA right now is COBRA-Bomb-Mortar and COBRA-heli-farm. Previously Boomerang-Village-COBRA and Dart-Farm-COBRA (way back before 3.1) were popular but both eventually fell out of use due to unknown reasons.