C4 Charlie is a Character in Bloons Adventure Time TD. He is unlocked in Haunted Swamp campaign Loch'd and Loaded on any difficulty. An explosives expert, Charlie operates like the Bomb Shooter, throwing bombs that can be upgraded to deal extra damage to MOABs and stun bloons, among other things.

C4 Charlie is a short brown haired monkey with the typical tan face. He wears a lime green Brodie helmet with a grey "C4" on the top of the lid. A pair of goggles are wrapped around the top of the helmet, alongside a long antenna on the right side of the head. Besides the head, C4 Charlie wears an ascot of the same lime green coloration, a backpack and green gloves.

Charlie will receive the following permanent boosts as he levels up:

C4 Charlie serves as a Bomb Shooter analog for Bloons Adventure Time TD, firing off a simple explosive attack that packs a punch and is resisted by Black and Zebra Bloons. Typical upgrades such as Frag Bombs, MOAB Mauler and Bloon Impact make returns from main series BTD5 and BTD6.

As any normal cannon would, C4 Charlie is a phenomenal tower when it comes to blasting large piles of non-MOAB Class bloons, with upgrades like Bouncing Bombs and Double Bomb being very effective at maximizing Charlie's damage output on top the many resulting frags from each explosion. It can be seen that the sheer quantity of frags and explosions even outshines the MOAB Mauler upgrade in terms of raw power, as Trinkets that increase damage are more susceptible towards the attack type with many low damage attacks to magnify.

A weakness that Charlie inherits from the original towers is the lack of Black and Zebra popping outside of Frag Bombs, lacking common workarounds such as Bloon Impact being able to damage explosive-resistant bloons in BTD5 and BTD6. To compensate, C4 Charlie can purchase the ability Signal Flare, allowing him and other non-Camo detecting towers to attack Camo Bloons, allowing for the other major weakness of Cannons to be bypassed. A new threat in BATTD is also in the form of Ghost Bloons, preventing all forms of damage by explosive-type attacks. However the upgrade Burny Stuff will just easily burn through them.

The MOAB Mauler Can rip through MOABs with ease if given enough speed Trinkets and the Time Bomb Weapon. Though Engineers Blueprints may not seem like it would help, it will effect frag bombs and help a bit more at attacking MOAB Class Bloons.

When Using an Ability:

When MOAB Class Bloons Are Popped:

C4 Charlie on the adventure menu of Loch'd and Loaded 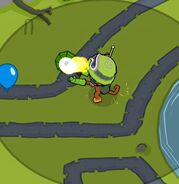 C4 Charlie about to use Signal Flare 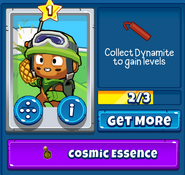 Retrieved from "https://bloons.fandom.com/wiki/C4_Charlie?oldid=269445"
Community content is available under CC-BY-SA unless otherwise noted.