C.H.I.M.P.S. (sometimes referred as CHIMPS or CHIMPS Mode) is a game mode that was first introduced in Bloons TD 6. The abbreviation stands for "No Continues, no Hearts Lost, no Income, no Monkey Knowledge, no Powers, and no Selling", being "the true test of a BTD master". It is unlocked after beating Impoppable on the respective map.

It is possible to get different coloured CHIMPS medals, (see Gallery). The Red Medal is unlocked if CHIMPS is beaten but the player has exited to home at least once. The Black Medal is unlocked if CHIMPS is beaten and the player has not exited to home during the whole game. When all other medals are completed, a Red Medal will unlock a Gold Border while a Black Medal will unlock a Black Border.

Despite appearing as a subsection of the Impoppable difficulty, CHIMPS prices towers the same as Hard Difficulty. Similar to Impoppable however, the game starts on round 6 as opposed to round 3, and completing CHIMPS rewards the same amount of Monkey Money as completing Impoppable, which must be completed before attempting CHIMPS.

Each letter in CHIMPS stands for a certain rule. The player is not allowed to:

On Co-Op Mode, similar rules apply as above, with some differences that are not existent in normal CHIMPS Mode:

Beating any CHIMPS map will reward the same amount as would for Impoppable. However, this amount cannot be increased even if Mo' Monkey Money is unlocked in the Monkey Knowledge (because Monkey Knowledge is disabled during this mode). Winning first time will also reward a small skull-shaped medal beside the Impoppable Medal. The skull can be red or black depending on whether CHIMPS is completed with or without loading the player's save game, with the black medal given if the player completed the map without loading a save.

If all medals are completed on a single track, the player is given a golden border around the track display border. Completing CHIMPS with the black medal will turn this border to a lustrous black color.

In Co-Op Mode, players will always get the black medal if the team wins, but if the map the player has beaten on Co-Op CHIMPS hasn't been beaten in single player CHIMPS, the profile will show a red medal. The 'Create Game' section will still show a black medal, though.

Only Expert Maps tend to become the center of attention when it comes to beating on CHIMPS Mode, with the exceptions of Dark Castle, Infernal, Workshop, and sometimes Flooded Valley, since even harder Advanced Maps such as High Finance, Peninsula, and Pat's Pond are relatively easy compared to the set of maps sometimes known as "True Experts" in the game.

The "True Expert" maps are usually considered as including #Ouch, Quad, Bloody Puddles, and Ravine. Some former True Expert tracks that have fallen out of this range over updates includes Muddy Puddles and Geared. For the purposes of this article, all Expert Maps plus Geared will be mentioned.

Note: Many parts of this section are outdated/contain inaccurate information.

2 Tower CHIMPS is a challenge where a map must be beaten on CHIMPS with only up to two towers.

3 Tower CHIMPS ABR is a challenge where a map must be beaten on ABR CHIMPS (ABR with CHIMPS rules) with only up to three towers. There has not been any successful combos with only two towers as of now. Due to the fact that income-producing towers are not "truly" banned (i.e. income can only be disabled when set on CHIMPS, due to limitations with Challenge Editor), towers such as Pirate Lord and BMA (due to Rubber to Gold) are among the banned towers for this challenge.

3 Tower CHIMPS <28RBS is a challenge where a certain map of greater than 28RBS must be beaten on CHIMPS with only up to three towers. Long maps such as Logs or Cubism are banned, leaving other shorter maps such as End of the Road to be enabled.

Because some maps have been completed with 2TC, specifically for Monkey Meadow and End of the Road, this challenge has eventually fallen out of use.

Least Cost CHIMPS is a challenge where a map needs to be beaten on CHIMPS with the least amount of spending possible.

2 Megapops CHIMPS is a challenge where a map needs to be beaten on CHIMPS where one tower has a damage count of at least 2,000,000. Regrows do not count, and must be deducted, even if Regrow Farms are not intentionally done by the player. Similar to 2TC, this challenge now has its own achivement, although it is not hidden.

Because of the possible vast extensions of CHIMPS, other challenges will be listed down here with a short summary.

Nerfs and buffs listed here are in terms of causing more difficulty/less difficulty for the player attempting CHIMPS walkthroughs. There are two sections: "General CHIMPS Rules", which lists changes in how CHIMPS Mode works, and "CHIMPS Metas", which lists significant balance changes that have affected metas in normal CHIMPS games.

Note: Prices given are in Medium Difficulty, not Hard Difficulty as it would in CHIMPS Mode, unless clearly specified.

This section lists important changes that have affected the meta of CHIMPS Mode strategies, with special attention to tower and upgrade balance changes. Any "fixes" or any buffs or nerfs to other towers/heroes that cause very significant influence in improving CHIMPS walkthroughs are listed here. Only these towers will be mentioned, as they pose a significant importance for beating CHIMPS maps.

Note: Prices given are in Medium Difficulty, not Hard Difficulty as it would in CHIMPS Mode, unless clearly specified.

Winning on CHIMPS Mode. Also note crossed out Powers icon to distinguish from other modes

CHIMPS Mode on a widescreen device. Note the greyed out icons of Powers

Losing on CHIMPS as of Version 24.0, displaying bloons leaked

Cubism finished with black border, achieved by completing all medals plus the exclusive Black CHIMPS badge

Logs completed with Golden Border; all medals completed but only Red CHIMPS badge, as the player exited to home during the CHIMPS game.

Both Cubism and Four Circles with Black Border 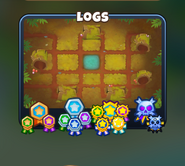 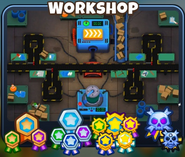