Knockback (Knocks back most non-MOAB class bloons by -300% speed, -150% for Leads and Ceramics)

Buckshot is the third upgrade of Path 3 for the Dartling Gunner in Bloons TD 6. This upgrade replaces darts with a close spray of six buckshots with slight random deviation, similar to a Druid's thorns but with more projectiles and the ability to knock back non-MOAB-class bloons for 0.2s by -300% speed, -150% speed for Leads and Ceramics. Each buckshot pops up to 4 bloons per buckshot and deal 4 damage each. However, the Dartling Gunner attacks much slower, from 0.2s to 1.5s (or 0.133s to 1.0s with 0-2-3), accuracy decreases greatly (~30 deviation radius with 0-x-3, ~10 deviation radius with 1-0-3 or 2-0-3), and the projectiles now disappear after reaching 130 units, +25% more with Focused Firing (162.5), from where they spawned from, thereby making it more of a limited range tower. The projectiles from the Dartling Gunner spread as they go forward.

The Dartling Gunner with the Buckshot upgrade now stands on a rotatable platform that mounts a cannon that shoots buckshots. The monkey's larger helmet is blue with yellow fortification bands on each side, and a yellow circle at the center of the helmet. On the middle of the cannon, there is a green band (yellow with Path 1 or purple with Path 2) around it that likely forces out the contents of shotgun shells in the form of buckshot projectiles. Every time the cannon bursts shots, a brief puff of white smoke comes out.

Buckshot now fires six projectiles, each dealing 4 damage with 4 pierce, every shot, and with the ability to pop Frozen, inherited from Powerful Darts. These projectiles are also larger, and apply knockback on non-MOAB-class bloons for 0.2 seconds, causing them to move backwards at 300% speed in that time. Leads and Ceramics receive 150% speed instead.

However, Buckshot massively increases its own projectile deviation, increasing the radii from 20 to 30, or from 8 to 12 with Focused Firing, and reduces its attack speed significantly, from an attack cooldown of 0.2 seconds all the way to 1.5 seconds (1.0 seconds with 0-2-3), and also reduces the lifespan of each shot from infinite to 130 units traveled.

Notably, Focused Firing grants an additional benefit to Buckshot, that being +25% lifespan, or up to 162.5 units traveled.

Buckshot customly aims based on direction and angle of where the Dartling points towards. It shoots straight movement projectiles controlled in a aim-based mobile style guided by touch-based mobility, albeit with some erratic angular deviation.

Unlike other Dartling Gunner options, Buckshot has a large spray of projectiles, much like slightly slower long-range Druid's Hard Thorns with custom aim, and extra damage and pierce, alongside a moderate range. As such, a Buckshot benefits much more from Alchemist buffs compared to alternate Tier 3 Dartlings, especially when interacting with Stronger Stimulant and Acidic Mixture Dip. Because Buckshot's attacks are much slower and have a lower projectile lifespan, it works better as a custom-aimed short-range tower that slowly shoots powerful burst shots. Combining this with Buckshot's in-built knockback and it can be quite valuable in a defense.

Buckshot's major niche is to produce bursts of high damage within a shorter but controllable range. However, its slow attack speed impaired its efficiency compared to other towers of a similar pricetag. Adding a small knockback on each hit, slightly reducing its price, and slightly raising its attack speed has made it slightly stronger, but not by much. 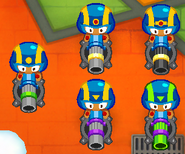 Comparing accuracy of 0-0-3 Buckshot versus 1-0-3 Buckshot (Note: the 1-0-3 buckshot's projectiles are more compact) 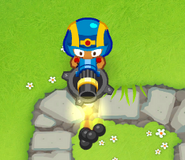 Buckshot in 3D perspective (only possible via hacking) 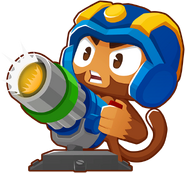 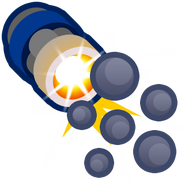 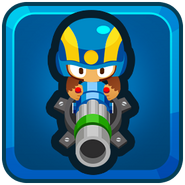