The Brutal Floating Behemoth is a MOAB-Class Bloon that was first introduced in Bloons Tower Defense 4. Currently, the B.F.B. is the 4th (the 1st place is occupied by the B.A.D, the second by the D.D.T, and the third by the Z.O.M.G.) highest ranked and 3rd slowest Bloon in the BTD series, after the Z.O.M.G and the BMC bosses. It moves four times slower than a M.O.A.B., red bloon and lead bloon. B.F.B.'s other appearances include Bloons TD 4 Expansion and Bloons Super Monkey. As its name suggests:

Although B.F.B officially stands for "Brutal Floating Behemoth", it has a total name count of 11, examples of which are Big Father Bloon, Bad Floating Bloon, Big Floaty Bloon and Big Friendly Bloon (shown in BTD5 Quests).

It is a colossal bloon which can easily be identified by its sinister eyes, blimp-like appearance, red and white color in Bloons TD 4 (red in Bloons TD 5), and its anti-monkey symbol (although in Bloons TD 6 the anti-monkey symbol was replaced with two white boomerang-shaped stripes). In Bloons TD 4, its first appearance is round 60, which is the final round before Freeplay Mode on Medium Difficulty in BTD4. In Bloons Super Monkey 2, it only appears in the last wave of bloon dunes (with an exception on wave 3-5 in the same game), and it takes much longer to pop than in Bloons TD 4. In Bloons Super Monkey 2 Mobile, it first appears in a trio at level 55. In Bloons TD 6 , its first appearance is in round 60, the last round of Medium Difficulty. It can become a Fortified B.F.B., parent of Fortified M.O.A.B.s, child of a Fortified Z.O.M.G., having a new health of 1400 HP (9,648 RBE)

When fighting it, it takes a large amount of hits to pop but the extremely slow speed compensates for that. Like the M.O.A.B., escaping will result in a game over since it deals 2,884 damage in Bloons TD 4 (3164 in Bloons TD 5), unless buying enough lives, using the Support Chinook ability or Healthy Bananas to earn sufficient lives to let the B.F.B. pass. Popping it rewards a total of 1525 Money, and releases 4 M.O.A.B.s.

The B.F.B. is the fourth highest ranked bloon to date. It is immune to glue in Bloons Tower Defense 5 and before, and the Ice Tower without the icicle impale upgrade (BTD 6 only), but it is also the third-slowest bloon in the game. Attention should always be focused on B.A.D.s, Z.O.M.G.s, B.F.B.s, M.O.A.B.s and D.D.T.s should they show up as they are serious threats. The Monkey Pirates has the MOAB Takedown Ability, which can pull a complete B.F.B.,regardless of its health. In BTD6, you can upgrade the tower to Pirate Lord, allowing the ability to pull 3 B.F.B.s instead. During later rounds (round 80+) multiple B.F.B.s show up in a single round, as well as multiple M.O.A.B.'s. One of the best ways to deal with B.F.B.s is to pile them with powerful towers such as Spectre, large numbers of MOAB Maulers, Technological Terror, or Temple of the Monkey God.

The B.F.B. appears in Bloons Super Monkey as the last boss. It is almost impossible to pop the B.F.B. with only Death Ray Vision. The player may try using Quad MOAB and Death Ray together with Plasma (Multi and Super if necessary). It takes much longer time to pop it than in Bloons TD 4, in which it roughly has the RBE of 5 Z.O.M.G.s from BTD5. Only one appears in the game, but it is still a serious threat. If enough bloons aren't popped and it escapes, the game is lost. It is also the last enemy encountered. Instead of releasing M.O.A.B.s when popped, it will explode into a variety of pinks to reds. While being hurt, it will release low ranked bloons, such as Red Bloons.

The B.F.B. appears again in Bloons Super Monkey 2. It first appears as a boss in stage 2-5, and one more appears in stage 3-5. It is very tough, taking 8000 hits before blowing in a very large cloud of bloons from Reds to Pinks. When hit, the boss B.F.B. spawns bloons from Greens to Blacks. It is so big you can understand how it could fit 4 M.O.A.B.s inside of it. (It does not spawn these in BSM2) it appears in stage 3-5 as sort of a "mini boss" to protect and guard the calamari blimp. If you looked at its size you could see about 10 Mini M.O.A.Bs inside of it. Also, in the health stages, on the third one, plaster appears.

The first B.F.B. appears in level 55 where there are a total of 3 B.F.B.s in the level, albeit not all at once. The B.F.B. also appears in later levels.

B.F.B.s appears in Bloons Monkey City as well. They appear in tiles, and their average difficulty is Very Hard but the easiest is Easy. However, there is a tile that has 2 B.F.B.s on it (Three B.F.B.s are shown on these tiles in BMC Mobile). These tiles are usually called "Packed B.F.B. Tiles" or "Double B.F.B. Tiles". This foreshadows a rush of B.F.B.s at the last round, or near it. This also makes B.F.B.s more common to spawn.

The B.F.B. has been buffed overall via game updates, which have made it harder to defend.

Note: The buffs and nerfs refer to according to the power of the B.F.B., and don't necessarily reflect whether it is good or not for the player or opponent.

B.F.B.s (along with the other MOAB class bloons) can now be stalled by Supa-Vac for 8 seconds.

B.F.B.s (along with the other MOAB class bloons) have half the health of their BTD5 counterparts before getting destroyed (700 HP → 350). 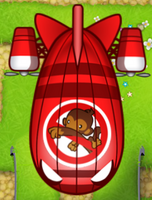 BFB appearing in the mobile version of BTD5 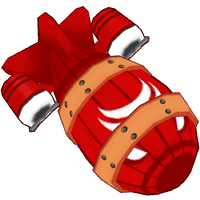 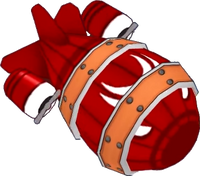 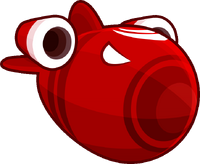 Health stages of the B.F.B. 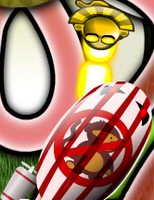 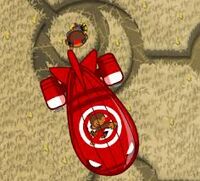 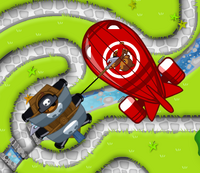 A Pirate Ship taking down a B.F.B. 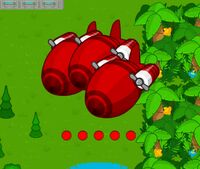 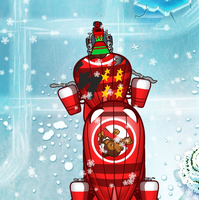 Back view of BFB in BATTD

Back view of severely damaged BFB in BATTD 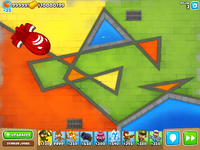 BFB in BMC2 Mobile. Unlike in other games, it doesn't have any symbols on it, similar to BAD
Add a photo to this gallery

Retrieved from "https://bloons.fandom.com/wiki/Brutal_Floating_Behemoth_(BFB)?oldid=278506"
Community content is available under CC-BY-SA unless otherwise noted.