4 (bullet attack, can bounce to nearby targets)
2 (shrapnel)

Shrapnel Explosion (when fully popped by the Sniper Monkey's bullet in one single shot, the bloon explodes 8 sharp shrapnel pieces)

Bouncing Bullet is a mediocre upgrade that most other towers outclass. It is still usable as bloon popping power, but a large amount of Bouncing Bullets is needed to clear a suitable amount of bloons. It becomes nearly completely useless in late-game, when the Shrapnel Shot is unable to activate due to the massively increased health of superceramics. Bouncing Bullet's main redeeming factor is Shrapnel Shot, the Bouncing Bullet's previous upgrade. It is stronger than Deadly Precision or Semi Automatic Rifle with Shrapnel Shot, and that is the main reason to utilise this upgrade. However, both of those upgrade paths function better with another crosspath than this tower, and the tower still remains very weak.

Projectile should no longer get stuck on track between jumps. 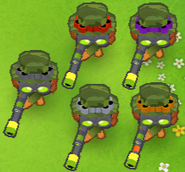 Bouncing ricochet pattern
Add a photo to this gallery

Retrieved from "https://bloons.fandom.com/wiki/Bouncing_Bullet?oldid=247999"
Community content is available under CC-BY-SA unless otherwise noted.