Bomber Ace is the third upgrade of Path 2 for the Monkey Ace in Bloons TD 6. It allows the Monkey Ace to drop an array of four powerful tightly-packed bombs if the Ace is near the track, while each bomb deals 3 damage on up to 20 bloons per bomb (32 with 0-3-1 or 0-3-2), and each bomb has an explosion radius of 35 (just over a 0-0-0 Dart Monkey's range). This quad bomb array has 1.36s cooldown per salvo.

Bomber Ace upgrades from the Sopwith Camel biplane design into a metal monoplane design with an underslung propeller on each wing. The fuselage is painted green, with a light blue and black stripe lining the unpainted nose. The cockpit is also lined with black paint, as are the engines, and the wings are painted black as well.

The bombs it drops are black with red fins and a red nose.

Instead of pineapples from Exploding Pineapple, Bomber Ace drops arrays of bombs onto nearby track. This replaced attack always targets on the track. Bomb arrays are produced every 1.36s (or 1.02s with 1-0-3). Bombs in the array are dropped in quick succession, roughly 0.1s between each bomb, with 4 bombs dropped total. Like Spy Plane, all its attacks deal +1 damage to Camo Bloons.

Bomber Ace is built as an upgrade for handling large groups of bloons within a tight region. When placed along a location where it can fly above a maximal amount of track, it becomes a good option for wiping out dense groups of regular bloons. It still requires support from other towers, as its bombs are still somewhat unreliable due to their random nature, but the increased deployment rate and explosion damage makes the Bomber Ace a far more reliable option compared to Exploding Pineapple.

Bomber Ace has overall been buffed since it was first released. The blast radius buff, deployment rate buff, and damage buff had allowed it to become more reliable as the Monkey Ace's primary lead-popping power as well as for countering grouped bloons. However, it has been nerfed slightly over later updates to make it less overpowered in Race Event situations.

Some explosions exploding in succession 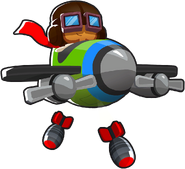 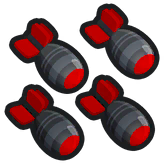