Bomb Shooter (pre-BTD6) is a tower in the BTD series. It is an original tower and it is called Cannon in BTD2 and BTD3, Bomb in Bloons TD 4 (iPhone/iPod Touch), Bomb Tower in BTD5, and Bomb Shooter in Bloons Monkey City and BTD6 . The Bomb Tower is a cannon that fires bombs at bloons to pop them. It can pop more than one at once if there enough gathered by the explosion point. An unupgraded Bomb Tower is completely ineffective against Black and Zebra bloons because of their immunity towards explosions.

At first, the Bomb Tower is weak, frequently missing in shots and causing small explosions. However, after it has been upgraded to Bigger Bombs and especially Missile Launcher, its shots deliver a big explosion and it rarely misses in shots.

In BTD5 and BTD Battles, the bomb tower is very useful because of its flexibility. Use Path 1 upgrades (Cluster Bombs/Bloon Impact) for popping standard bloons or Path 2 upgrades (M.O.A.B. Mauler/M.O.A.B. Assassin) for popping M.O.A.B. class bloons.

It's impossible to completely destroy a MOAB class bloon with an unupgraded bomb tower because of the Zebra Bloons and Black Bloons inside, unless you have Level 3 Bombing Range activated, the tower upgraded to Bloon Impact, in BTD5 and BTD6, Frag Bombs in BTD3, BTD4, and BTD5, or Level 5+ Striker Jones placed in BTD6.

In Bloons TD Battles, is in the first tier of towers and is absolutely free but the four tier of upgrades costs

30 each. A bomb tower is very useful when leads have been unlocked but if you have the Monkey Buccaneer unlocked it might be just as good to use them. However, the Cannons have MOAB Maulers, so these might be good in late-rounds when MOABs start to appear. Be wary of Camo Bloons as Bomb Towers can't attack them (outside of the MOAB Assassin Ability).

Explosions are generally nerfed in mobile, with Bomb Towers being no exception. However, Bloon Impact is drastically more effective due to the increased stun duration, and MOAB Assassin can benefit from the Monkey Fort glitch.

Bomb Tower is a fairly popular tower due to its flexibility and overall usefulness, having the advantage of area damage (especially when upgraded to the Cluster Bomb and Bloon Impact upgrades) and specialized MOAB-popping power (path-2 upgrades MOAB Mauler and MOAB Assassin). However, like the Mortar pre 4.1 it's not as used compared to Flash due to the much smaller blast radius. It is often used when the other selected towers are weak against grouped bloons or MOAB Class Bloons. Popular loadouts include: Dart-Farm-Bomb, Heli-Farm-Bomb, and Bomb-Mortar-Chipper. Ninja-Farm-Bomb was formerly used often (especially when update 4.1 was first released), but became less popular after the Ninja got nerfed in future updates and players figuring out its weaknesses (camo bloons, especially Camo Leads).

Bomb-COBRA-Mortar has also seen some use, albeit not as much as the first 4 listed probably because a large amount of beginners and a minority of more experienced can't afford cobra.

Overall, this tower has been buffed, but not significantly.

A Cannon in BTD2. The "Cannon/Bomb Tower" looks the same in BTD1

A Bomb Tower from BTD4 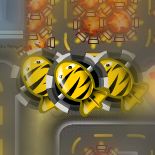