Bomb Blitz is the final upgrade of Path 3 for the Bomb Shooter in Bloons TD 6. Upon losing a life, after a very brief animation, all bloons on screen below a ZOMG (below a BFB before the 2.0 update, although they could still be popped) will be destroyed and ZOMGs and BADs take 2000 damage. This includes Fortified bloons as well. It also fires tertiary cluster bombs every shot instead of every second shot. Primary explosions, secondary explosions, and tertiary explosions also will now deal 5 damage each. Its explosions can also damage Black Bloon properties, as it inherits "fraggy explosions" from Frag Bombs upgrade.

Bomb Blitz is most often utilized for its passive ability, capable of wiping out all bloons on screen with ease, especially on Primary Monkeys Only when paired with Ezili's sacrificial totem. However, Bomb Blitz remains useful even without relying on its passive ability, as its main explosions can be used to wipe out many grouped bloons at once with ease given sufficient buffs to it.

When activated Bomb Blitz Passive Ability, one of the following sounds will be played: 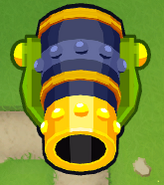 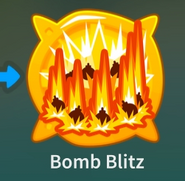 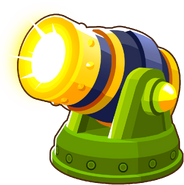 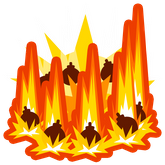