Free (can be played on the Internet)

At the begins with $650 starting cash, 40 lives, and must beat all 50 rounds. The game is set on a single map, which consists of a green patch of grass for towers to be placed, in addition to a concrete path that bloons float along towards the exit. The aim of the game is to build towers that pop all of the bloons that arrive on screen. Bloons have many layers, some of which (only Black Bloon and White Bloon in this game) have immunities. Beating all 50 rounds gives the victory screen.

Bloons Tower Defense has 5 different towers to pick from. Listed below are all the towers.
When selling a tower, the player gets 80% of the money spent on the tower.

The Dart Tower is the cheapest tower in Bloons Tower Defense.
Cost: $250
Description: Shoots a single dart. It can upgrade to piercing darts and long range darts.

Ice Towers freeze bloons for a short period of time. Ice Towers are ineffective against White Bloons.
Cost: 850
Description: Freezes nearby bloons. Frozen bloons are immune to darts and tacks, but bombs will destroy them. Can upgrade to increased freeze time, and larger freeze radius.

Bomb Towers launch bombs that explode on impact. Bomb Towers are ineffective against Black Bloons. However, a bomb tower works well when near an ice tower.
Cost: 900
Description: Launches a bomb that explodes on impact. Can upgrade to bigger bombs and longer range.

Super Monkeys shoot darts incredibly fast. Its only upgrade is Epic Range (2400) which improves its range greatly.
Cost: 4000
Description: Super monkey shoots a continuous stream of darts and can mow down even the fastest and most stubborn bloons.

In Bloons Tower Defense, the enemies are the bloons, like the original Bloons game. In the game, there are 6 different kind of enemy Bloons, some with their own unique special abilities.

The Red Bloon is the first enemy encountered in the game. Red Bloons are the slowest and weakest Bloon in Bloons Tower Defense. They do not release a bloon when popped.
First encounter: Round 1
RBE: 1

The Blue Bloon is the second enemy encountered in the game. Blue Bloons are slightly bigger and faster than Red Bloons. They release a Red Bloon when popped.
First encounter: Round 3
RBE: 2

The Green Bloon is the third enemy encountered. Green Bloons are faster and bigger than Blue Bloons. Popping Green Bloons may be difficult at earlier rounds, due to their relatively fast speed compared to Blue and Red Bloons. They release a Blue Bloon when popped.
First encounter: Round 6
RBE: 3

Black Bloons are the fifth type of Bloon encountered. They are immune to explosions. They can be considered as the "twin" of the White Bloon, with the only difference being their immunities. They release two Yellow Bloons when popped.
First encounter: Round 27
RBE: 9

White Bloons are the sixth and last type of Bloon encountered in Bloons Tower Defense. They are immune to freezing. They can be considered as the "twin" of the Black Bloon, with the only difference being their immunities. They release two Yellow Bloons when popped.
First encounter: Round 41
RBE: 9 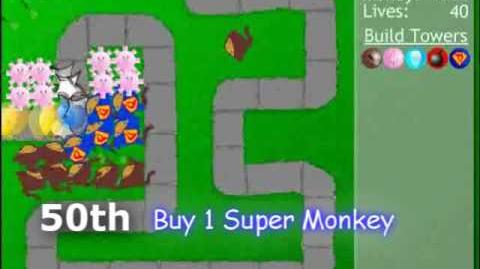 Round 42, with a variety of clustered bloons

Round 29, with many black bloons

Round 17, with green, blue and red bloons