It was initially revealed on the official Version 24.0 update video for BTD 6 on an iPad owned by Ninja Kiwi (placed on the timestamp 1:45). Sam from Ninja Kiwi made no comment about the game in the update video, however. Ninja Kiwi also had previously stated their possibility of adding a new Bloons game within the next year, as revealed in the March 2021 Ask Me Anything livestream.

On the next day following the video upload, 12th March 2021, Sam from Ninja Kiwi made a response stating they truly are working on Bloons TD Battles 2, although this is the only information they provided besides that they encourage the BTD6 community to "keep an eye on [their] social pages".

On 24th March 2021, upon acquisition by MTG, Ninja Kiwi stated that "...we are pleased to officially announce that Bloons TD Battles 2 will launch later this year."

According to Ninja Kiwi employee JoeyRainstorm, Bloons TD Battles 2 had been in development since sometime in late 2018.

On April 23, 2021, the official Twitter account for BTD Battles 2 was made known to the public, which also shows early development of the BTD Battles 2 logo. The first post has a GIF with the caption "Nothing to see here". The actual creation of the account was November 2019.

On May 13, 2021, the official Ninja Kiwi Games Twitter Page unveiled a new GIF of Gwendolin throwing her Cocktail in the air and catching it. Link.

On May 25, 2021, the official BTD Battles 2 Twitter Page unveiled the steam page and subreddit. Link to Twitter status. Several screenshots and a game description was shown for the Battles 2 page. The screenshots at the time were in-game footage during the pre-alpha stages of the game. The game is planned to be released on Late 2021 according to the Steam page.

On May 26th 2021, the description was corrected such that the number of towers is listed to be 22 instead of 21, meaning all Bloons TD 6 towers as of Version 25.0 will be included in the initial release for Bloons TD Battles 2. Link to subreddit post about it.

On July 5th, the Twitch Page for Battles 2 was created along with the YouTube Section for it. Link

On August 13th, a new Bloons TD Battles 2 Teaser Video was released. The Twitter account also has a new post with the video and has the caption, "The Road To Master Starts Here...", implying that there are different skill level names for players.

On October 22nd, another Bloons TD Battles 2 Video was released. It has the title "The Rules of the Arena." It showed the Arena structure, how long a season last, and detailed how long matches are and how Sudden Death works.

Everything currently known about BTD Battles 2[]

The following information was announced in the May 28th, 2021 blog:

Revealed in other sources:

The banner for Bloons TD Battles 2, which can also be found on the Twitter page. 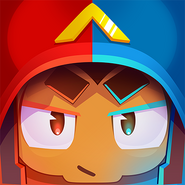