Bloons Super Monkey 2 is a game released by Ninja Kiwi on mobile devices in a completely new form than the flash versions, with improved 3D graphics, boost crates, tons of levels, new characters, new bosses, and more. The game was released on November 1, 2016 (postponed from the original date of release: October 19). It's free to get the game. It is available to iOS 8+ players and Android devices (and any other operating systems?).

Bloons Super Monkey 2 Mobile has very similar gameplay to Bloons Super Monkey 2. The player controls a monkey by holding a finger on their screen. With each bloon popped, Blops are earned, which is currency used to unlock various upgrades and abilities. Players can be rewarded with different medals based on the amount of bloons they have popped in a level: "Bronze", "Silver", "Gold", and "Diamond". "Diamond" is the hardest to achieve, as it requires every bloon in a level to be popped.

Powerups are found by collecting crates that appear when certain bloons are popped in each level. There are three crates per level and each contains a random powerup.

At the beginning of every level, a maximum of two powerups may be equipped to use during that level. Most are constantly active, but some are activated abilities that can be used only once. Since two powerups can be used simultaneously, try to select powerups that complement each others' effects. For example, combine Gold Rush and Hidden Treasure to farm blops quickly.

There are three tiers of powerups represented by 1, 2, or 3 stars, respectively. 1-star powerups are the most common and tend to be the least powerful, but options like Turbo Boost and Hotter Cooldowns can be extremely useful. 2-star powerups are uncommon and have many powerful options, like Neva-miss Targeting. 3-star powerups are very rare but have some of the most powerful effects, including Hidden Treasure, Gold Rush, and Explosive Shots.

Upon successfully completing a level, powerups equipped at the start of the level gain 1 use toward ranking up. Each powerup begins at Rank 1 and can progress up to Rank 4, becoming more effective with each rank.

Certain bloons hidden throughout each level contain useful instant-use powerups and crates. When the bloon is popped, the item flies upward on the screen and gradually falls to the bottom. Items must be collected by touching them before they fall off the bottom of the screen. 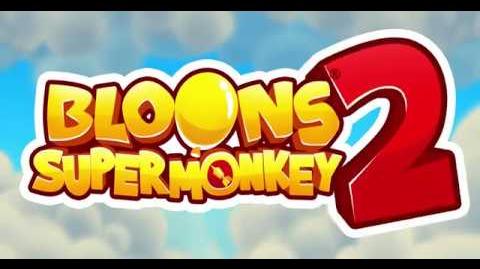 The Lab with upgrades unlocked

BSM2 All Core Upgrades with Epics.