For the browser-based version of this game, see Bloons Monkey City.

Bloons Monkey City Mobile is a gaming app playable on mobile as well as on other compatible devices. It is a variation of the web browser based tower defense game Bloons Monkey City and was released by Ninja Kiwi on December 3, 2014.

Bloons Monkey City Steam is an early adaptation of the standard mobile game adapted for computers, released on 10th April 2020, for both Windows and Macintosh. Unlike other games of the BTD5 generation, this version of Bloons Monkey City is only playable on computers running newer operating systems. It can be played on macOS Catalina and later, as it is 64-bit.

They're monkeys... but not as we know them. Bloons Monkey City is being invaded by aliens! Join in this new recurring event and help capture the aliens hiding among your citizens and send them back to space. Defeat the invasion and earn some great rewards! We've also added the ability to replay special missions whenever you like.

78 tracks are used in BMC Mobile. 66 of them fit into the terrain types that appear in the browser version's Grassy Pass while the other 12 relate to Special Missions which, as of a program update, have become replayable via the My Tracks facility. My Tracks, in the Mobile version, can be accessed from City Level 1.

Several buildings in the mobile version differ from those in the original browser version. For example, now each tower requires a different building for their respective upgrades. For example, in the Browser Version the Monkey Academy facilitates upgrades for both Dart Monkeys and Boomerang Throwers. In the Mobile Version, the Monkey Academy only services Dart Monkey upgrades while a Boomerang Institute is made needed for Boomerang Thrower upgrades. Other changes in the mobile version's requirements for MvM include needing a Bloon Sprint Track to research yellow and pink Bloons, an Extreme Temperature Chamber to research black, white and zebra Bloons and a Bloon Compression Tank to research rainbow Bloons.

Conquered tiles in mobile are divided into 16 spaces in a 4x4 grid. Buildings that might fit on a single tile in the Browser version will, in Mobile, fit within 3x3 tile subdivisions in Mobile. This leaves seven tile subdivisions for decorations that can be placed around buildings and paths which can also be decoratively placed beneath buildings and other decorations. Unit Buildings, by purpose, accommodate monkeys. These monkeys and those from MvM Buildings may occasionally start walking from their bases on any section of path that isn't obstructed by buildings or decorations.

The Mobile Version includes different types of Bloon Strategies (at ZOMG level, 50% are normal tiles, and the other are bloon strategies, with some having 5% and some 4%). These are similar to Assaults in BMC Flash. Note that there are no Bloon Strategies for tiles below Green Bloons:

All other rushes from the online version also appear, which are D.D.T., Packed MOAB, and Packed BFB. The only difference is that strategies do not get paired up with any of these types of tile. Alongside, Packed MOAB, Camo Craziness, and Fast and Furious tiles and some MvMs may contain DDTs.

Note that on harder tiles, once the player reaches a certain round, all rounds will be entirely composed of bloons of a rank of black or above, with the minimum rank increasing as the game progresses. On these rounds, no Camo or Regrow Bloons will appear (exceptions: regular Regrow Bloons appear in Regrow Rush of Death tiles, Camo Bloons appearing in Sneaky Camo attacks, DDTs appearing on various MvM attacks and DDT tiles, MOAB Pack, Fast and Furious, and Camo Craziness). On tiles close to the edge, this round will be round 7, but Bloon Beacon and track replays can do this earlier.

Similarly to the Bloons Monkey City Flash, Leads are considered stronger than Zebras, which means that tiles with the highest Bloon ranking as Lead Bloons will contain Zebra Bloons instead.

See also: Monkey vs. Monkey #Differences between Flash and Mobile

With similarity to the browser version, MVM opens up at city level 8 but with players only required to build a single 2×2 Bloon Inflation Factory in order to start a Monkey vs. Monkey match. Players do not need to construct separate Bloontonium Generators and Bloontonium Storage Tanks, as the Factory generates the Bloontonium by itself and shows the percentage to which its tanks are filled. Once the tanks are 100% filled, players can begin attacking other players. As a city grows and progresses in levels, abilities to generate more advanced forms of bloons will need to be researched and this will require a range of MVM Buildings.

Pacifist Mode in mobile also differs from the browser version in that players can enter Pacifist Mode even if they have more than 1000 honor.

Version 1.7 introduces events where players take on challenges to gain rewards. Version 1.8 introduces the Bloon Beacon and Boss Bloons. Strangely enough, the bosses and Bloon Beacon did not arrive to iOS until Late December 2015, and Dreadbloon and Blastopopoulous arrived in 24th January 2016. There are currently four bosses in the game and all have unique tracks, looks, traits and special abilities. Any Monkey Teams event running will become accessible from Level 8.

Bloon Beacon had arrived late in 2015. Early December for Android devices and Late December for iOS Devices. Since then, Bloon Beacon can be used to do the same as the Flash Version, which was summon a boss if it was during a boss event. As of 24th January 2016, all of the Bosses were added in the game. 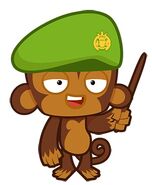 Monkey Ace flying around the city

The first screen shot in the app store.

Bloon Beacon and Bounty Cards in Version 1.8.1 being introduced

Starting up screen at Christmas

Boss Bloons in Version 1.8.3(?) being introduced

Army Monkey's warning of the Z.O.M.G.

Clouds covering a city, often shown during intermissions between travelling between cities

No Towers Available warning message on a Hills Terrain tile

King Monkey's message when attacking a tile with a Bloon Strategy

Reaching the bottom edge of the land

WASD keys loading screen tip, which is not featured in mobile versions