Bloons (or Bloons 1) is a single-player browser game (a flash game) about monkeys popping bloons. Many bloons have special powers. You can choose from a set amount of darts in Normal Mode or unlimited darts mode. Unlimited darts will make it easy to win but not give you score so be warned if you want to beat your high score. Bloons 2 was released after "1276 days and 1,063,118,911 plays" of the original Bloons. This was the first Bloons game ever made.

They are 8 different bloon types in addition to 4 differently coloured regular bloons.

There are 50 levels in Bloons. Here is the list of the levels: 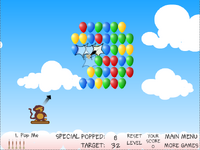 Dart as it pops bloons 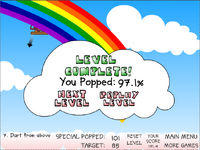 Completing a level gives a nice rainbow and cloud 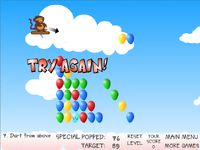 The "Try Again" warning after not popping the required number of bloons, which then restarts the level
Community content is available under CC-BY-SA unless otherwise noted.
Advertisement