Bloonjitsu is the 4th upgrade on Path 1 for the Ninja Monkey in BTD6. This upgrade allows the Bloonjitsu Master to throw 5 shurikens at once instead of 2. Every time it throws out shurikens, a spray of 5 shurikens at a slight angular deviation per shuriken will be shot out. Each shuriken pops 4 bloons each, and shuriken attacks are shot every 0.42s.

However, unlike BTD5, it is not possible to crosspath a Bloonjitsu with both Distraction and Seeking Shuriken.

Just like its BTD5 counterpart, Bloonjitsu is decent as an early mid-game option on its own, more specifically with the Seeking Shuriken crosspath. Even though both Distraction and Seeking Shuriken are mutually exclusive for a Bloonjitsu, Bloonjitsu is a superior early mid-game carrier with Berserker Brew or Stronger Stimulant, as this increases the damage of all its shurikens by +1 plus extra pierce for basically full uptime. 4-0-1+ Bloonjitsu + Stronger Stimulant is a popular combo among many CHIMPS games because of how powerful the combo is.

Bloonjitsu did not receive any balance changes since it was first released in BTD6. However, it can no longer have both Distraction and Seeking Shuriken at the same time, as those upgrades are mutually exclusive as crosspaths for this upgrade.

As with all Ninjas, there is a Camo Prioritization target option available that may be useful in niche situations involving Camos. 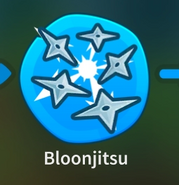 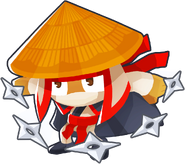 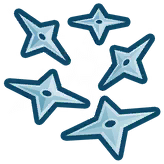