Bloonjitsu is the final upgrade on Path 1 for the Ninja Monkey in BTD5, allowing the Bloonjitsu Master to throw 5 shurikens at once.

This upgrade used to be indirectly cheaper to get in BTD Battles Mobile thanks to Sharp Shurikens and Double Shot getting their prices decreased. However, since update 4.9 the overall cost to get a 4/x Ninja Monkey is now the same as in BTD5.

A Ninja Monkey with Bloonjitsu attacks a Bloon 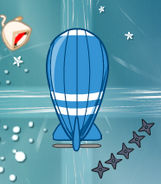 A Bloonjitsu Master on a Socket of Power. 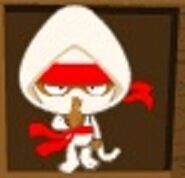 Mobile artwork. Notice how his suit doesn't extend to ankles.

Legendary card with Bloonjitsu on it.
Add a photo to this gallery

Retrieved from "https://bloons.fandom.com/wiki/Bloonjitsu_(BTD5)?oldid=272134"
Community content is available under CC-BY-SA unless otherwise noted.