Blooncineration (also known as Blooncin or Cin) is the final upgrade of Path 3 for the Mortar Monkey in Bloons TD 6. It allows the Mortar Monkey to burn MOAB-class bloons, dealing 100 damage to all affected MOAB-class bloons as well as 5 to normal bloons per 0.75s for 3.75s. In addition, each explosion creates a Wall of Blooncineration, a blaze similar to Wall of Fire, at impact location, causing further damage to any bloon except Purple Bloons. Along with incinerating napalm and blazes, Blooncineration can now strip all bloon properties from bloons up to BFBs and DDTs (but not ZOMGs or BADs).

Blooncineration, although stated to deal extra damage versus normal bloons, it is in fact the best at demolishing MOAB-class bloons into weaker bloons. Combined with the added blaze attacks that spawn where each explosion lands on, significantly increased damage to MOAB-class from the improved explosive napalm will easily create masses of weaker layers. Fortunately, like all Mortar Monkeys, Blooncineration can be controlled easily by targeting specific groups of blimps, staggering the groups by popping certain blimp groups one by one, so as not to overwhelm backup defenses.

One notable hot point about Blooncineration is its potency against both Round 98 and Round 99. The built-in Shattering Shells helps weaken Fortified BFBs on Round 98 in addition to its blazes and incineration largely reducing total RBE of the round, but at the risk of doing too much damage such that the defense will struggle against the remaining bloons. As for Round 99, Fortified DDTs will be defortified and decamoed by Blooncineration, making it significantly easier for defenses that typically struggle against DDTs. Support against high-HP blimps and Super Ceramics is likely the only really necessary addition to a Blooncineration.

Blooncineration has been buffed greatly to become a stronger offensive-based upgrade, contrasting the typically supporting role that preceding upgrades Signal Flare and Shattering Shells would fulfill. 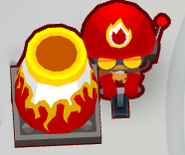 "Walls of Blooncineration" on the target areas

Manual retargeting of "Walls of Blooncineration" across the map 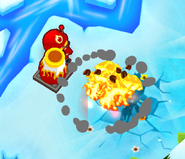 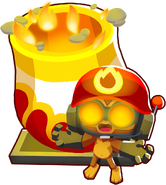 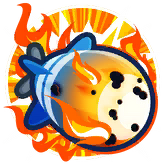