Slowest Bloon in BTD series, Boss Bloon, health increases by 2000 every level, M.O.A.B. Class Bloon.
Bloonarius the Inflator is an event-only M.O.A.B. Class Bloon found in the Bloonarius event in Bloons TD 5 and Bloons Monkey City. Its health varies, though its relative health is shown by a health bar at the top of the screen. 1 cash is given per damage dealt, ensuring that the player will have enough money to construct defenses. No tile is awarded for completing the level in Bloons Monkey City. Upon popping Bloonarius, it states "I'll be back!" and the player receives the relative tier of CT Milestone worth in rewards.

Each time the player defeats Bloonarius, its health increases, and the bloons spawned during the level increase in difficulty. Defeating a Bloon Beacon is required to repeat the event.

Failing to pop Bloonarius, the message popup states "DEFEAT! ...But the Boss is damaged. Chase it down and try again!". The player is then sent back to their city with the option to continue the fight with Bloonarius at the same level and remaining health, but at the cost of city cash. Defeating another Bloon Beacon is not required to resume the level.

It also appears in BTD5 Mobile As an Event, and Bloons Super Monkey 2 Mobile as the seventh boss in Helium Heights.

Health + RBE table below for the first 26 levels.

Bloonarius's health for any level past level 19 can be determined using the equation below, where "x" is the level to be accounted for:

Bloonarius moves at a relative speed of 0.1 of the speed of a Red Bloon. As of September 2020, it is the slowest bloon in the Bloons franchise.

Every time the health bar drops to one of the skulls, a bloon comes out, depending on level. Note that they are different on mobile as the strongest bloon spawns occur later and there is a Zebra Bloon spawn that occurs before Rainbow on mobile. To make up for the easier bloon spawns on mobile, the natural bloon rushes are more harsh than on Flash.

Bloonarius is the boss of level 94. He comes on screen twice before the level ends and spawns MOABs which you can't fly through. 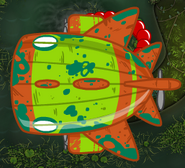 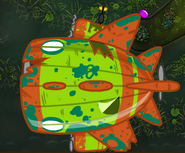 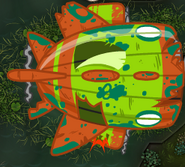 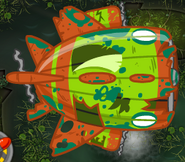 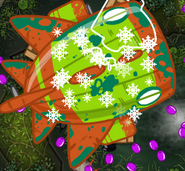 Event in the Monkey News 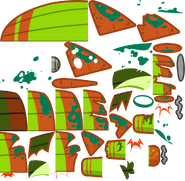 Victory in Mobile!
Add a photo to this gallery

Retrieved from "https://bloons.fandom.com/wiki/Bloonarius_the_Inflator?oldid=267095"
Community content is available under CC-BY-SA unless otherwise noted.