Once bought, the Engineer will automatically deploy a Bloon Trap around any part of track within the Engineer's own radius. The Bloon Trap will make bloons that come over it be absorbed into the trap while no money is awarded immediately. It can hold up to 250 RBE worth of bloons. Once full, the rims of the Bloon Trap will flash blue and magenta, prompting the player to collect it for twice as much cash as the bloons would normally give. If the player does not collect the Bloon Trap after a certain while, it auto collects, giving less cash than manual collection. Only one trap can be active per Monkey Engineer. It does not destroy MOAB-class bloons or Camo bloons (except in BTD5 Mobile), which fly over it, unlike spikes. 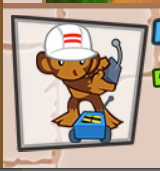 Bloon Trap icon in BTD5
Add a photo to this gallery

Retrieved from "https://bloons.fandom.com/wiki/Bloon_Trap_(BTD5)?oldid=270880"
Community content is available under CC-BY-SA unless otherwise noted.