In BTD6, this upgrade returns as the fourth upgrade of Path 3 for the Engineer Monkey. One Bloon Trap can be deployed on the map around the nearest track near the Engineer's own radius (like Smart Spikes on Close setting). Bloons that come over it are trapped inside, though no money is awarded for individual bloon consumption. MOAB-class bloons and Camo Bloons (unless granted camo detection prior to deploying) will simply pass right through the Bloon Trap, as per usual. It can hold up to 500 RBE worth of bloons (530 with Bigger Traps). Once full, the Bloon Trap will shake to the left and right and emit an off-white colored aura. Like in BTD5, if the trap is collected manually, the player gets twice as much cash as the bloons would normally give; if not collected within 15(?) seconds, or the Bloon Trap is upgraded to XXXL Trap, it will autocollect itself for only the original cash amount as if all bloons were popped normally. Only one trap can be active per Engineer Monkey per round; a new Bloon Trap will be replenished after the current round ends if the trap is absent, and only two traps can be deployed per engineer each round (this is not the case for XXXL Trap). 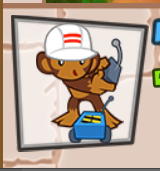 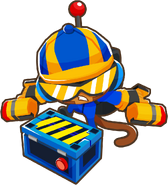 Official BTD6 upgrade icon
Add a photo to this gallery
Retrieved from "https://bloons.fandom.com/wiki/Bloon_Trap_(BTD5)?oldid=248037"
Community content is available under CC-BY-SA unless otherwise noted.