For other uses of "Lab", see Lab (disambiguation).

The Bloon Research Lab is a purchasable building in Bloons Monkey City that allows the player to research different bloons. Once a bloon has been researched, it can be used to attack other players with.

The Bloon Research Lab costs $700 to purchase, takes fifteen minutes to build, and takes up one tile, and uses

20. When bought, it will start with Red Bloons, Blue Bloons, and Green Bloons. Level 8 is required to unlock this building (although Level 9 is required for Monkey vs Monkey). 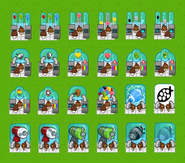 All upgrades of the Bloon Research Lab.
Add a photo to this gallery

Retrieved from "https://bloons.fandom.com/wiki/Bloon_Research_Lab?oldid=260221"
Community content is available under CC-BY-SA unless otherwise noted.