The Bloon Master Alchemist (commonly referred to as BMA) is the fifth upgrade of path 3 for the Alchemist. It allows the Alchemist to throw special insta-shrinking potions every 10.0s. These potions have infinite range and, when thrown, will target the strongest non-BAD Bloons, and once splashed onto the main target the insta-shrink potion will subsequently hit up to 200 Bloons (or up to 10 MOABs, 4 BFBs, 4 DDTs (with camo support), or 2 ZOMGs), permanently transforming all of the affected Bloons into Red Bloons in the process. Each insta-shrink potion has 200 pierce, but MOAB-class Bloons consume extra pierce depending on type: MOABs consume 20 pierce, BFBs and DDTs consume 50, and ZOMGs consume 100, while BADs consume zero pierce because they cannot be transformed at all.

In addition, regrowth/camouflage property on any non-MOAB class Bloons gets removed on Bloons once they transform into a red Bloon (requires camo detection for decamolization)

Bloon Master Alchemist takes on an extremely rich urban outfit, as shown by his clothing. He wears big glasses with a red cape similar to the Super Range Super Monkey.

The instashrinking potion appears to be a long-necked flask in the shape of a round-bottomed flask except its neck is positioned obtusely from the vertical position instead of perpendicular. That flask is filled with yellow opaque liquid.

On the upgrade portrait, Bloon Master Alchemist appears to be jumping above an acid pool nearby a recently transformed Red Bloon.

The acid pool attack is locked on Normal, being an on-track attack, and can only activate if there are no Bloons nearby or if the offensive potion misses. The instashrinking potion is locked on Strong and has global range.

At the cost of slowly depleting pop-based income, Bloon Master Alchemist comes with powerful global-ranged shrink potions that transform any Bloon (except BADs) into Red Bloons, essentially acting as an instakill to Bloons especially MOAB-class Bloons (because a Red Bloon has comparatively less health). Usually, a stable defense and income flow is required to make use of Bloon Master Alchemist without repercussions. It sees the most use in extreme late-game runs and on special challenges involving the need to instakill powerful groups of Bloons.

According to Ninja Kiwi, the shrinking potion intentionally comes with a double-edged effect that depletes income over an effective instakill versus MOAB-class. All buffs here are simply buffs inherited by earlier upgrades.

When converting Bloons into gold:

When converting a Bloon into a Red Bloon: 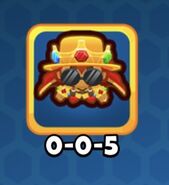 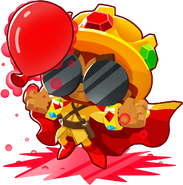