Bloon Liquefier is the fourth upgrade of Path 1 for the Glue Gunner in Bloons TD 6.

It increases the corrosion rate of the glue to 1 damage every 0.1s, or 2 damage every 0.1s to Ceramics, as well as increases pierce of glue projectiles by +1. As with all Glue Gunners with Corrosive Glue or higher, the Bloon Liquefier can target MOAB-class Bloons and damage them over time, although the glue itself will last half as long, similar to most types of glue, and does not slow them.

Bloon Liquefier technically upgrades the glue from a Level 3 glue to a Level 4 glue, allowing it to override Dissolver Glue (from Bloon Dissolver) status effects. Bloons affected by Bloon Liqueifer, including MOAB-class, are inflicted with one damage every 0.1 seconds for the duration of the glue, or two damage every 0.1s versus Ceramics. MOAB-class bloons receive half the duration.

This upgrade deals decent damage to normal MOABs and Ceramics, as Glue Gunners with corrosive upgrades can now affect MOAB-class bloons. In general, Bloon Liquefier is in awkward position in the game because it tends to lack sufficient pierce compared to other competitors such as The Big One while only being slightly cheaper.

Bloon Liquefier is much stronger than it was in BTD5 because of now hitting MOAB-class bloons, but remained outclassed by alternative effective combos. It has received some buffs in BTD6 history to make it more usable in a mid-game role and to compete with more popular mid-game options. It also received a pierce buff to make Path 3 crosspathing more practical in a real game scenario. 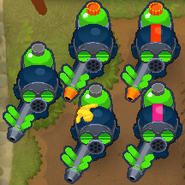 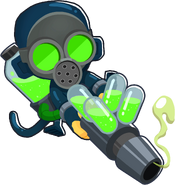