Knockback (Knocks back most non-MOAB class bloons by -300% speed, -150% for Leads and Ceramics)

Bloon Exclusion Zone (also known as BEZ) is the fifth upgrade of Path 3 for the Dartling Gunner in Bloons TD 6. Compared to Bloon Area Denial System, it increases the attack speed by +50% (every 0.25s, or 0.167s with 0-2-5) by shooting from a total of 6 barrels instead of 4, increases projectile number from 6 buckshots to 12, increases pierce from 4 to 6, and overall damage of each buckshot increases from 4 to 8. The two top barrels additionally are tall enough to ignore almost all forms of Line of Sight.

Bloon Exclusion Zone is significantly taller than its preceding upgrade, on account of the two additional barrels; the 2nd, 4th, and 6th are also given a darker grey color, in conjunction with the entire tower being painted a darker blue. This extends to the monkey, who sees more of their body obscured, with only their head being properly visible; they wear a dark blue helmet with white stripes, yellow side guards, a yellow emblem on the forehead, and a pair of blue-tinted glasses.

Bloon Exclusion Zone fires 50% faster than Bloon Area Denial System, with an attack cooldown of 0.25s, 0.167s with 0-2-5, on account of firing from 6 barrels; the top 2 are considered tall, and thus can fire over obstacles.

As with the previous upgrade, it receives Target Independent, detailed below.

Bloon Exclusion Zone customly aims based on direction and angle of where the Dartling points towards. It shoots straight movement projectiles controlled in a aim-based mobile style guided by touch-based mobility, albeit with some erratic angular deviation. Barrels alternate based on the turret's set targeting priority, from top to bottom.

Bloon Exclusion Zone is a powerful option for popping grouped bloons and single-target bloons due to its high projectile count and high damage. Bloon Exclusion Zone doesn't necessarily require support to become usable in a real game, but for the best results, it should be buffed with supports that greatly benefit high-projectile towers. Because it shoots lots of projectiles per shot, it benefits a lot from Alchemist buffs, most specifically Stronger Stimulant, as well as from Pat Fusty.

Bloon Exclusion Zone's power remains fairly similar compared to when it was first released. It is strong at dealing high damage to MOAB-class and bloons, but slightly more for the former. Bloon Exclusion Zone got buffed in a few updates, but only by a slight amount.

Bloon Exclusion Zone shooting over the hedges on Hedge

Bloon Exclusion Zone's barrels, for a closer view of its special targeting 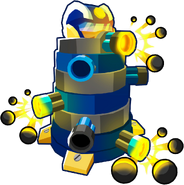 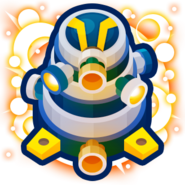 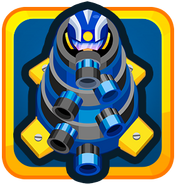