Bloon Dissolver is the 3rd upgrade on path 1 for the Glue Gunner. It costs $2805 (Easy), $3300 (Medium), $3565 (Hard) and $3960 on Impoppable. It makes the corrosive glue more powerful, popping bloons 4 times as fast, 2 layers every second, Researching Bloon Dissolver will cost

In BTD6, this upgrade returns with the same path formation and the same costs. Despite the description, it does not pop down two layers every second, but instead pops one layer every 0.575 seconds.

The Bloon Dissolver note from www.btd5.com 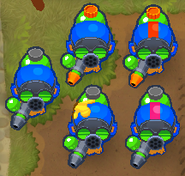 Retrieved from "https://bloons.fandom.com/wiki/Bloon_Dissolver?oldid=237804"
Community content is available under CC-BY-SA unless otherwise noted.