Bloons Wiki
Register
Don't have an account?
Sign In
Advertisement
in: Articles in construction with a WIP, Bomb Shooter, Bloons TD 6,
and 6 more

Bloon Crush is the fifth upgrade of Path 1 for the Bomb Shooter in Bloons TD 6.

As an upgrade from Bloon Impact, Bloon Crush can stun both regular bloons and MOAB-class Bloons for 2s, making it extremely effective in later rounds where many ZOMGs and DDTs are spawned. Combined with its fair attack speed, it can essentially permanently stun any bloon (except the BAD). It now pops any bloon type, including Black Bloons, which means it can also affect DDTs effectively.

As with many of the Path 1 crosspath benefits, the 5-0-2 Bloon Crush crosspath increases potency of Frag Bombs, producing 16 powerful fragments. Each fragment deals 12 damage plus another +12 versus Ceramics, and gains a massive pierce increase from 3 to 20, a massive DPS bonus in comparison to the stats of the 4-0-2 Bloon Impact.

This upgrade is significantly larger than its predecessor, sporting a dark blue color scheme with lighter blue stripes, as well as a spiked orange-red barrel and large wheels with black tires and spiked red hubcaps. On the back of the dark blue body is an emblem of a red right-handed fist (thumb on right-side palm side facing up).

Bloon Crush improves the stun applied by Bloon Impact, causing it to last 2 seconds and affect all stunnable MOAB-class bloons. It also improves base damage to 12.

Crosspathing with Frag Bombs causes the frags to deal 12 damage, 24 to Ceramics, with 20 pierce, instead of the 3 and 3 respectively for Bloon Impact; however there are still only 16 of them. They also inherit the increased lifespan and size.

The Bloon Crush absolutely halts almost every round up to 99 as long as there is damage support for the dense clumps of MOABs and Super Ceramics, such as from Sun Avatar. Unfortunately, the Bloon Crush lacks self-sufficient damage and comes with a very high price, making it fairly difficult to use in a normal game without decent income generation. In freeplay late-game, Bloon Crush occupies the role of a staller, which makes it fairly useful in normal late-game too.

Bloon Crush has been slightly buffed overall over time. The biggest buff here is refreshing stuns, allowing Bloon Crush to permastall bloons and blimps if hitting them persistingly. Some massive changes are given to the Frags crosspath in order to give this option some DPS value. 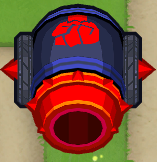 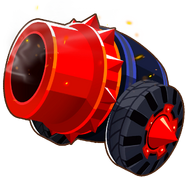 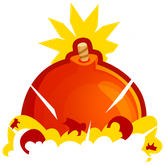