Bloon Beacon is a special event for Bloons Monkey City and Bloons Monkey City Mobile that appears on tiles. It typically appears on the lowest XP reward tile left uncaptured, just like Monkey v Monkey, but will never appear on Volcano, Cave, Treasure Chest or Special Mission tiles. The Bloon Beacon will reduce the number of rounds the tile will take to complete (by half, rounded up). Once the beacon has been captured, 6 hours will be needed for the beacon to automatically recharge. A "Recharge NOW" facility is available that will cost

There are half as many rounds, but 2.25x cash is earned per pop. Bloon progression is as if half the rounds were missing, so if the tile would have had a MOAB on round 10, it would appear on round 5. Do note that a tile with an odd number of rounds will be divided by 2 and then rounded up (such as a tile with 27 rounds, which then becomes 14 rounds).

Hardcore Mode is not available during the Bloon Beacon gameplay.

The player is rewarded with 1 guaranteed Monkey Knowledge Pack for beating the tile. This is in addition to any other rewards that would normally be earned, whether they be event, or normal.

If a Boss Battle event is active, the Bloon Beacon will summon the appropriate boss, for example, Bloonarius the Inflator, Vortex: Deadly Master of Air, Dreadbloon: Armored Behemoth or Blastopopoulos: Demon of the Core.

The news about bloon beacon 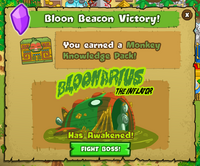 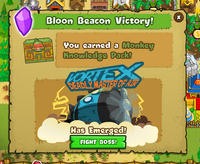 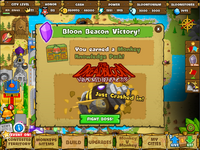 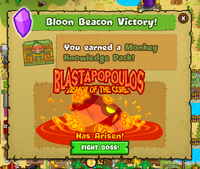 Bloon Beacon on a MvM attack 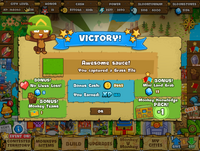 Victory to a Bloon Beacon tile with NLL, a Monkey Teams reward of 1 MKP, a Mini Land Grab reward of

12, and another MPK
Add a photo to this gallery
1/1
Add photo
Retrieved from "https://bloons.fandom.com/wiki/Bloon_Beacon?oldid=259581"
Community content is available under CC-BY-SA unless otherwise noted.