Purchasing this upgrade also enables use of the Rocket Storm Ability, which when activated, shoots out up to 100 missiles towards the nearest 100 bloons (all bloons on screen if less than 100) on the screen every 2 seconds for five times. 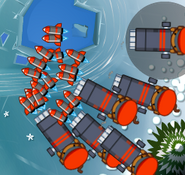 Many rockets being shot from the B.A.D.S.

Retrieved from "https://bloons.fandom.com/wiki/Bloon_Area_Denial_System_(BTD5)?oldid=274583"
Community content is available under CC-BY-SA unless otherwise noted.